India Pale Ale (“IPA”) is a beer category that in recent years just became synonymous with “craft beer.” It’s often regarded as the beer style that started the craft beer boom of the last 10-15 years and is often the one that most people begin with when they start venturing out of mass-market and into craft beer territory.

Often, it’s fresh and bittersweet aromas that draw people to loving it so much, coupled with its above-average alcohol content and fuller body than popular pilsners or lagers.

You may have heard the interesting story behind its invention, too. During British colonization of India, it was very difficult to ship beer that far (from Britain all the way around Africa to the Indian subcontinent). This was particularly critical to keep British troops (and colonists) happy. Initial attempts resulted in shipments of beer spoiling in the tropical heat of the long journey. Needless to say, this was a real issue for the beer-loving Brits.

“While sailors sick from scurvy groaned above, the beer below fared just as poorly. It often arrived stale, infected, or worse, not at all, the barrels having leaked or broken — or been drunk — en route.”
Smithsonian Magazine

The solution was to create a beer that could actually hold up during the long journey. The result was a beer that was higher in alcohol and bitter from the additional hops, a combination that ended up not just preserving the beer better, but actually created a very unique and tasty profile. And thus, the India Pale Ale was born!

For more on the history of the IPA and its prominence in the craft beer scene now, check out our article on The Rise of the IPA.

Given the popularity of the IPA, it’s one of the styles that get a lot of love and attention from breweries small and large. There is just an embarrassment of riches to explore. Here is the 52Brews list of 15 great IPAs! 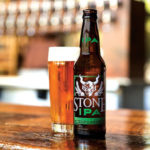 Stone Brewing Company’s famous “Stone IPA” was launched in 1997, which also makes it the longest-running recipe on this list and a pioneer early on in the craft beer boom.

Speaking of “boom,” when you taste it you’ll immediately notice an explosion of juicy citrus flavors, with a fresh bitterness that lingers just perfectly.

At 6.9% ABV, it’s light enough as a refreshment and strong enough to go particularly well with meals. 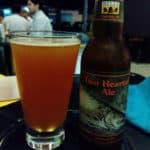 Bell’s has been brewing this one with 100% Centennial hops for many years, and its name comes from the local Two Hearted River in Michigan (made famous also by Ernest Hemingway’s great short story, “Big Two-Hearted River”).

Despite the strong dry-hopped flavor, this IPA is nevertheless very well balanced, giving you a nice grapefruit aroma and some sweetness from the malt.

With 7% ABV, you can easily enjoy more than one at each sitting. 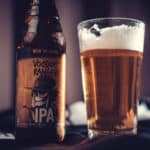 The New Belgium Brewing Company brings you not just a cool name and label, but one of the more popular IPAs in America right now.

With an ABV of 7%, it’s got a great balance between the dryness of hops and the sweetness of the malt.

It’s simultaneously flavorful and refreshing, making it a great choice for warm or colder weather. 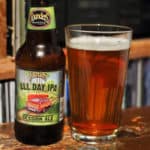 The Founders Brewing Company has brewed a lot of different styles over the years, and this IPA is definitely up there with their best, and is now one of their most well known. (1)

Its surprisingly low ABV of 4.7% means you can enjoy several of them on a hot day. It’s got a clean and fresh finish, as you’d expect from the low ABV, and packs a lot of flavor for such a light beer.

As this beer grows in popularity, it’s becoming a mainstay in lots of restaurants’ beer lists (and not just craft-focused bars). 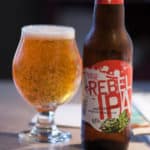 The Boston Beer Company has been brewing the Sam Adams range for a very long time. The “Rebel IPA” is another hit from this iconic American beer brand, tipping its hat to the IPA craze – and doing a great job at it.

Though at just 6.5% ABV it’s not particularly strong, it has a characteristic hoppiness to it – Boston Beer Company came up with a secret combination of Cascade, Centennial and Mosaic hops, along with their own creation of HBC 566. Well done! 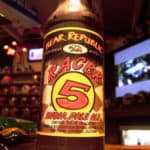 The Bear Republic Brewing Company’s Racer 5 IPA is one of the stronger beers on this list, with an ABV of 7.5%.

This is a multi-award winning beer that is going to have you wishing for a second! Check out Better Beer Authority’s balanced and thorough review below. 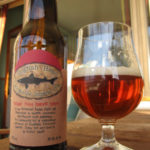 This is the flagship beer of the Dogfish Head Brewery in Delaware, and it brings an excellent balance of citrus fruit and the dryness of hops. (These are the guys that create the 60-, 90- and 120 Minute IPAs; the numbers refer to how long the hops are boiled during the brewing process, creating unique flavors for each version).

For the 90-minute, there is a subtle aftertaste that doesn’t linger too long, which makes it ideal for spicy or barbecued food. Note also that the 90 is much more accessible price-wise, as the 120 can often be very expensive (and difficult to find)!.

The ABV is 9%, which packs a nice punch while not being overwhelming. 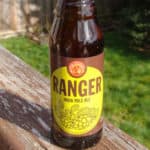 Another great choice from the New Belgium Brewing Company, this one is like the “little brother” to the Voodoo Ranger listed above.

We say “little brother” because the ABV is only 6.5% and it’s not quite at the same intensity when it comes to the flavor of hops.

As far as IPAs go, this one is more suitable for people who don’t like a lingering aftertaste, or who are more partial to less intense flavor profiles. 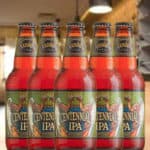 The result is a wonderful fruitiness and dry flavor that just has you coming back for more.

With the perfect amount of malts, this IPA beer won’t leave a tart aftertaste either. 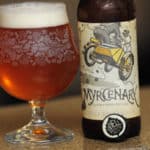 From the Odell Brewing Company comes this powerful IPA that is full of everything you would expect. Using strong and aromatic American hops, you immediately get that characteristic bitterness that makes it – surprisingly – very refreshing.

Like so many IPAs in this ABV range, with the ABV of 7%, you can get the perfect combination of flavor and strength. 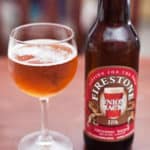 Despite its name and label harkening back to the IPA’s British roots, this beer is made in California by the Firestone Walker Brewing Company.

With the ABV of 7%, it’s strong enough to hold up on a longer sea journey, so it’ll do just fine going from the keg into your belly. 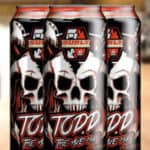 The next one comes from the Surly Brewing Company in Minnesota. Its awesome label shows the brewery cares about design and the seriousness of their brew!

What we love about this one is that it has achieved a perfect balance between the British Golden Promise malts and Citra and Mosaic hops. Absolutely delicious!

The ABV of 7% also shows that the brewers respected the traditional strength of the classic IPAs. (3) 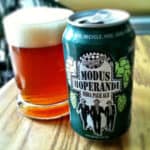 Next on our list of top IPAs comes a creation from SKA Brewing in Colorado. It has a beautiful golden color, and a very serious bitterness that – if you like bitterness, that is – is going to blow you away. Out of these 15, it’s definitely the king in the bitterness department.

Even with the bitter flavor, the tart hops are able to balance this brew out with a smooth and fruitier aftertaste.

And the ABV of 6.8% is right about where you would expect it to be. 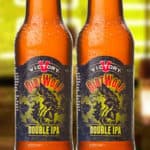 Now for our first and only double IPA on this list, Dirtwolf from the Victory Brewing Company does have a lot of bold flavors.

The brewery has packed it full of American hops, and that provides it with a lot of citrus flavor and bitterness.

And unlike all the other options, this one really is for those of you who like a strong beer, thanks to the 8.7% ABV. 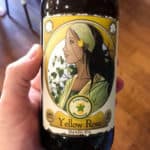 The final IPA on our list comes from Lone Pint Brewery. You will definitely want to make sure that this doesn’t end up being a lone pint, though!

With an increased amount of malt comes a perfect combination of sweet and citrus flavors that work really well together.

By sticking with a traditional brewing process, they have created an ABV of 6.8%.

Each brewery listed here has done an exceptional job to really stick with a tradition that dates back to the 18th century, while adding gastronomic precision and variety to this classic style.