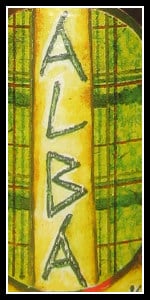 The Scottish people have a long-standing history of brewing beer. By long-standing, I mean about 5,000 years.

Although the beer they brewed in 3,000 B.C. is nothing like the great Scottish brews of today, it did have the source of fermentation. The Neolithic Scotts used bread as a source of alcohol, but they did not use hops in their brews. Kind of difficult to imagine isn’t it.

According to Wikipedia (I know, a reliable source), the first historical documentation of hops occurred when the ancient Romans granted the plant a proper name. They called it Humulus lupulus. It wasn’t until about 400 A.D. when the Babylonians first used hops in their brewing process. Obviously, they were onto something because it caught on like crazy everywhere in the world except Scotland. Beer without hops was popular in Scotland even through the 19th century.

Today hops-less beer is difficult to find because it’s considered a historical drink instead of a popular one. Lucky for us, Heather Ales Ltd. has created a historic pine ale called Alba.

Here’s what the brewery has to say about it:

“Alba is a triple style ale brewed to a traditional Highland recipe from Scots pine and spruce shoots pickled during early spring. Pure malted barley is boiled with the young sprigs of pine for several hours then the fresh shoots of the spruce are added for a short infusion before fermentation. A tawny brown strong ale with spruce aroma, rich malt texture, complex wood flavour and lingering finish. Best drunk at room temperature from a wine goblet as an after dinner digestive.”

Our Experience With It 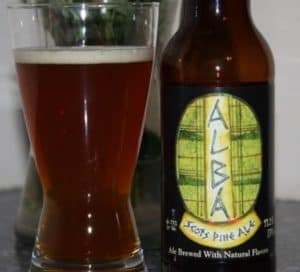 As with most Christmas seasons, my family members want suggestions for presents to get me. I try to come up with things around the house that I want/need, but most of time my list always ends up being filled with different types of brews. This year was no exception.

This year I got a gift set from my brother. When I opened it, I saw a bottle with a lime green label called Alba. Needless to say, it was screaming at me to try it. I opened it and poured it into my usual tulip glass. Immediately, I found an aroma of a fruity, herby sensation with a hint of pine—very unique. I love it.

The mouthfeel of Alba is moderately carbonated and has a great malty, sweet background. The taste is a bit overwhelming and shocking at first, but I actually liked it. Alba has a spruce/pine flavor that dominates the mid-palate with earthy tones. It has a rather sticky, lingering finish as well.

Although many people who have reviewed this ale don’t appreciate it because it is somewhat overpowering and has a relatively high alcohol content. I disagree. This brew has a pronounced flavor and is worth trying at least once.

Get rid of your ideas about what a pine ale tastes like. Just because this beer doesn’t have any hops, it doesn’t mean it’s not a beer worth trying. Try it for yourself. I think you will be pleasantly surprised with the boldness of flavor and uniqueness that a hops-less brew can bring to your palate. Be bold. Try it out today.

For more styles of beer and beer review, make sure to check out our page below.

– Learn More About The Different Styles of Beer –