Chilling the wort after boiling is vital to the success of the brewing process. It needs to be cooled from the boiling point to the correct yeast-pitching temp or the fermentation process will be adversely affected.

You can let the wort cool on its own but chilling it quickly is considered the better way to go because it minimizes the possibility of contamination by microorganisms.

Those new to brewing often revert to chilling their kettles in a bath of ice. However, as batch volumes increase it becomes necessary to find a better, more dependable way. Enter the wort chiller.

The Importance of Wort Chilling 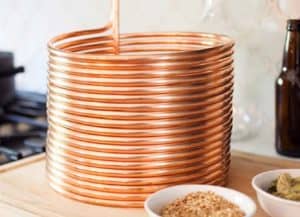 As mentioned, it’s vital to cool your wort as quickly as possible after boiling.

This is because it doesn’t take long for bacteria to gain a foothold in the warm, cozy environment of the post-boil kettle.

Reducing the temperature quickly eliminates the risk of bacterial contamination. [1]

It also helps prevent oxidation of your batch and it effectively lowers the level of dimethyl sulphoxide (a chemical compound that can give your brew a very disagreeable odor and flavor) in the wort. [2]

Chilling the wort also helps produce a clearer beer. Most consider the wort chiller to be one of the most important purchases the home brewer can make.

The purchase of one typically marks the point when a person transitions from someone futzing around with the idea of brewing their own beer to someone committed to making a quality product.

An immersion chiller is a far more effective way to quickly reduce the temperature of your wort. Also, as a more cost-effective option than ice baths, an immersion wort chiller is a purchase that you only have to make once that will serve your cooling needs for a lifetime. – Jeff Flowers, Brewer

The 3 Types of Wort Chillers

There are three different types of wort chillers, and we’ll take a look at them below. 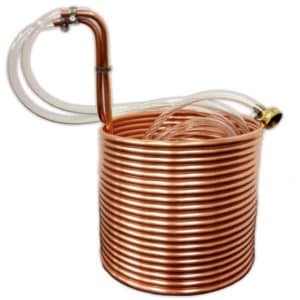 This is a copper coil through which cool water circulates. This coil is immersed in the hot wort and the heat from it is conducted through the copper and carried away by the circulating water.

This product is the most popular type of chiller for homebrewers because it’s simple, effective and affordable. You may be able to cool a 5 gallon batch down to the right yeast pitching temperature in less than 20 minutes. 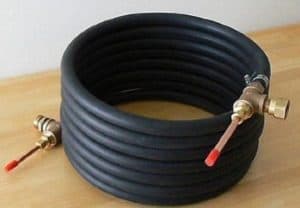 With one of these, the wort itself is passed through a copper tube flowing in one direction while cool water flows in the opposite direction through a garden hose that surrounds the copper tube.

Heat from your batch is conducted through the copper, absorbed by the cool water and carried away.

The wort can either be gravity fed through the copper tube or fed through using a pump. They are typically used with RIMS or HERMs systems. 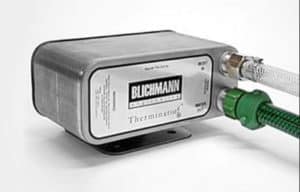 These products are compact devices wherein hot wort and cold water flow in opposite directions from one another similar to the counterflow chiller.

Much larger plate chillers are typically found in breweries where the plates are not fused together the way they are in smaller, homebrew cold plates.

How to Use an Immersion Wort Chiller 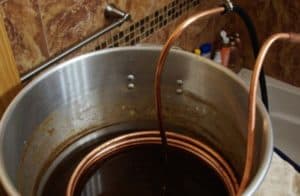 We believe wholeheartedly that the immersion chiller is the best cooling solution for the novice homebrewer (and some not so novice home brewers as well).

Specifics: A typical immersion chiller will cool a 5 gallon batch from a piping hot 212° to the optimal range of 60-72° in roughly 20 minutes, sometimes less depending on the temperature of the water used and the surrounding or ambient temperature as well.

Pro Tip: If one were interested in trimming the cooling time even further, they could place their batch in an ice bath while also using the immersion chiller.

With this method, however, you need to be careful that water from the ice bath doesn’t splash or
otherwise find its way into the wort, else it will contaminate it.

That said immersion chillers are easy to set up and use. They’re also extremely affordable. Most of all though they’re a simple way to get the job done and done right.

As such they allow the novice brewer to get used to the process of chilling their wort without also having to adjust to a technological learning curve. 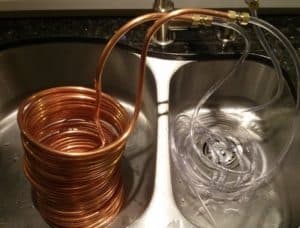 Every piece of equipment you use in the homebrewing process will need to be properly maintained as is the case when it comes to any equipment used to produce products intended for human consumption.

If you choose not to change the oil in your car no one is going to come down with some hideous bacterial infection as a result.

If, however, you don’t make sure your homebrewing equipment is always well maintained and sanitary someone very well might.

As such, it’s crucial to keep your equipment clean at all times. The immersion wort chiller is, after all, immersed directly into the hot wort. Therefore it is going to emerge covered with all manner of residue that can and will play willing host to airborne microorganisms.

We recommend you use whatever type of sanitizer you use on the rest of your homebrewing equipment to clean the immersion chiller and that you do so prior to each use as well. That’s because it’s going to pick up some of those same microorganisms just sitting around between uses.

If you don’t clean it prior to use, it could easily transfer those microbes to the wort. And then you’ve got a real problem.

What are You Waiting For?

The wort chiller is a must-have piece of equipment for any aspiring home brewer. If you’re just starting out we suggest you get yourself an immersion chiller. They’re easy to use, dependable and affordable.