In all likelihood, you’ve never heard someone at your local tavern say “Give me a Budweiser Peach.”

That’s because, although the idea of adding fruit to beer goes back centuries, it isn’t something that’s ever gained traction with or been promoted by, big mainstream breweries.

Fruity beers (at least in the West) have always been a specialty item produced by local breweries or, more commonly, home brewers.

If you’re a home brewer kicking around the idea of adding fruit to your beer you’ve come to the right place.

Below we’ll take you through the steps you’ll need to follow in order to ensure you wind up with a satisfying product and avoid those missteps that could undermine flavor.

Adding Fruit to Beer: A Step by Step Guide

Adding fruit to beer seems like a pretty straightforward thing to do. But there’s a process involved that must be respected, lest you wind up with microorganisms in your brew that could negatively affect color and flavor.

Follow these steps to successfully add this delicious goodness to your beer. 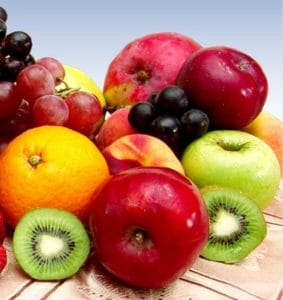 Before you can add fruit to your home brew you have to decide which type you’re going to add and in what form. By that we mean you’ll need to pick a flavor:

– and then determine whether you’re going to add that flavor in the form of fresh fruit or juice.

There will always be those who claim fresh is the only way to go.

But adding fresh fruit is a more labor-intensive and exacting process since you have to prepare and monitor the brew carefully to make sure none of those microorganisms we mentioned earlier have migrated from the fresh fruit into your brew.

Adding fruit juice makes things simpler and safer since bottled or packaged juice has already been shorn of any bacteria or other micro-nasties.

However, if you decide to use packaged juice, you’ll need to make sure it is free of preservatives because they could react poorly with the yeast during fermentation.

Step 2: How Much Fruit Should I Buy? 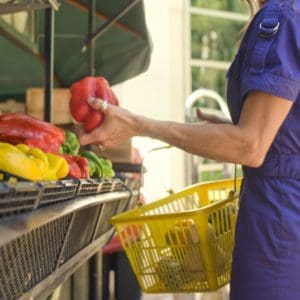 There is no etched-in-stone answer to this. No way to say with absolute certainty “You should add this much peach to your beer.”

In most cases it will depend on the type of beer you are brewing; the base style.

You’ll need to experiment a bit to find just the right balance between the particular qualities of your brew and the characteristics of your fruit.

For instance; you might determine that 5 gallons of stout requires 2 pounds of raspberries.

However, if you add 2 pounds of raspberries to your pale ale, it may completely overwhelm the taste of the beer.

That said, the following chart can be used as a starting point for determining how much fresh produce to add to your brew. You may want a little more or a little less.

Step 3: When to Add Fruit to Beer? 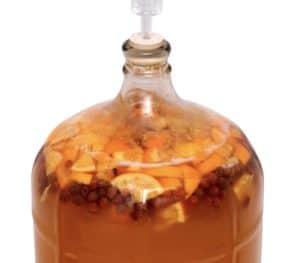 You may be tempted to add fruit to your wort while it’s boiling in order to kill off any of those nasty microorganisms. In a word, don’t.

“Why not?” You ask. Because boiling fresh fruit will release pectin that will wind up throwing off the flavor and clouding the brew.

A better course of action is to add directly to the fermenter or to steep it in the wort while it’s still hot. Steeping the fruit is similar to making a cup of tea.

Place your produce in a clean nylon bag and submerge the bag in the wort while it’s still hot, (but after the boil is complete), for at least 30 minutes.

Alternately, you can add your fruit to the fermenter. In that case, you would puree the fruit first before adding it to the wort in the fermenter. If you want to add store-bought juice instead of fresh produce, this is the way and the time to do that as well.

In most cases, you’ll get the best result if you add to the wort a week before bottling. Adding it to the primary fermentation can result in the fermentation process stripping the fruit of its flavor.

Keep in mind also that adding too early could also upset the sugar balance during the initial part of the fermentation process. And that could lead to all kinds of problems down the line.

“Brewers should avoid fruit products that contain anything other than 100% fruit. Some fruit products contain added sugar. This sugar won’t harm your beer — it’ll just boost the alcohol content slightly — but you’ll need to add more of it to get enough flavor. ”
– Chris Colby, Brewer

Brewing with Fruit: A Word to the Wise 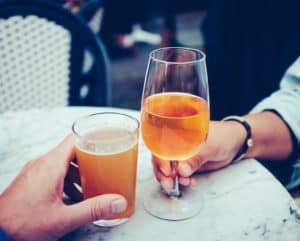 Brewing beer at home by incorporating fruit into the process is a simple process.

However, you must be careful to ferment at the specific temperatures that are recommended for the style of beer you’re brewing.

The exact temperature at which to ferment should be included in the recipe and will probably be a temperature range rather than a specific temperature. If you can’t find the temperature on the recipe, it is not a good candidate for adding fruit.

What Are You Waiting For?

Brewing beer with fruit is a great way to give it a distinctive touch. But it’s not as simple as just adding pieces of raw produce to your boil.

Follow the above guidance to wind up with a satisfying result. It may take a bit of experimentation to determine exactly how much of which type works best for you.