Europeans began producing wheat beer many centuries ago and to this day Hefeweizen (pronounced hay-fuh-veyt-zen) is one of the best-known beer styles on the continent, particularly in Germany where it originated during the Middle Ages.

The name sounds as if it was derived from some mysterious Bavarian castle that rises out of the mist in the foothills of the Alps, but it actually has a far more prosaic origin.

But just as Americans call Germany, well, Germany, while the Germans themselves call their country “Deutschland,” so too is there a disconnect between Americans and the Germans when it comes to the name of this style of beer.

While we in the US refer to it as “hefeweizen” – a name which emphasizes the yeast component – the Germans themselves refer to it as “weizenbier,” which literally means “wheat beer”.

That said, we’re going to provide you with a simple recipe that will enable you to enjoy the many pleasures of this traditional beer at home.

What is a Hefeweizen Beer? 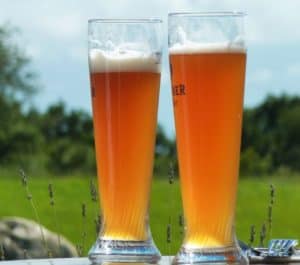 At 5 to 5.5%, the alcohol content percentage of Hefeweizen is a bit higher than some domestic beers but it’s nothing out of the ordinary.

This is also an unfiltered beer that wears that distinction on its sleeve in the form of a characteristic cloudiness resulting from the suspended yeast.

The yeast strains at work in Hefeweizen also produce slightly fruity esters that remind some of banana and others of bubblegum.

Hefeweizen typically employs noble hops like the German Hallertau while many Americans substitute with Hallertau offshoots like Liberty. Regardless, low hopping is another characteristic of Hefeweizen.

The grain bill here is typically composed of a Pilsner malt and of course, wheat, which combine to give it a full flavor with subtle bready overtones. In some corners of Germany, you’ll hear this all-grain beer style referred to as “Weissbier” which literally means “white beer.”

This moniker derives from the fact that although cloudy, it usually takes on a very pale yellow color that looks almost white. This is a result of the malted wheat used in its brewing. Finally, look for your Hefeweizen to retain a substantial head. [1]

For more beer styles check out this page here: https://52brews.com/different-types-of-beer. You can also watch this informative video from WCBeercast to learn more about the history of this beer style.

You won’t need to reinvent the brewery wheel in order to make this Hefeweizen all-grain recipe. The basic homebrew setup will suffice. That means a: 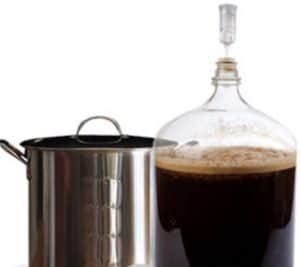 So as we said, nothing out of the ordinary for this German beer Hefeweizen recipe. If you have all those items you’re ready to proceed. 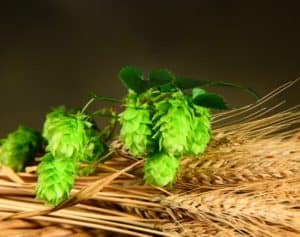 Our Hefeweizen all grain recipe begins with some top-quality ingredients:

How to Brew Hefeweizen Beer: Our Step-by-Step Guide 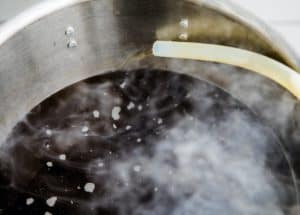 Target a mash for this Bavarian Hefeweizen of approximately 1.5/1 water to grain. If you have the equipment to do a step mash rest at 110° Fahrenheit for 20 minutes before raising the temp to 152° F through the completion of the conversion. If you can’t do a step mash a single infusion mash will do with a temp of 151° F.

Use near-boiling water to infuse the mash. Sparge the mash slowly using 170-175° F water until you have approximately 6.5 gallons of wort for boiling.

Total boil time for the wort will be 90 minutes. This will help reduce SMM (S-Methyl Methionine) and DMS (Dimethyl Sulfide) in the finished product. After boiling for 30 minutes add the hops. [2] 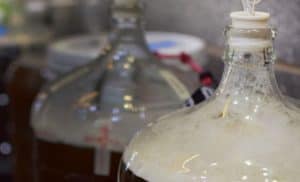 Once the boil is complete, quickly chill the wort to 62° F then siphon to the fermenter and pitch the yeast.

Ferment at 62° F for one week. Then bottle or rack to a keg and enjoy! 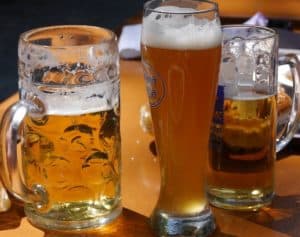 German Hefeweizen beer has been making significant inroads on the craft beer circuit of late both for the simplicity of the brew process and for the outstanding quality of the finished product.

It essentially has two things that many find lacking in American beers: full-bodied flavor and a thick, long lasting head.

There are other recipes available on the net today so after you’ve tried our recipe give the others a spin as well and enjoy the subtle differences.

Your Hefeweizen beer will endow your next holiday get-together with some real Old World atmosphere and charm and will sure to get the attention of your homebrew hombres who are all going to want to jump on the wheat beer bandwagon.

So what are you waiting for? Try our recipe and see why the Germans have been sold on wheat beer since the medieval times.

If you want to get more tips on how to brew the perfect batch of beer, check out this simple guide on home brewing: Beer Brewing Made Easy. You’ll surely find something for you here whether you’re a complete beginner or a beer brewing expert.