Winter can be downright unpleasant if you’re not the type to handle the cold well. But, as with almost everything else in life, beer can make it better!

There are certain beers that are just naturally “wintery.” You know it when you taste it. They’ll not only warm your body, but they give you those cozy-under-the-blanket-on-a-cold-day feels.

These beers are typically known for their higher than normal alcohol content and the typical “winter seasonal” spices in their flavors.

So, which ones should you try? Here’s a list of 15 amazing winter beers to help get you through the season. Take a look! 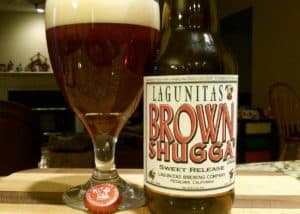 Brown Shugga is without a doubt one of Lagunitas’s best creations.

An American Strong Ale with a very warming ABV of 10.00%, it has a dark copper hue that really distinguishes it.

Full-bodied and complex, it features an amazing blend of flavors and aromas that almost overwhelm the senses with rich brown sugar (predictably), freshly baked bread, and fruit and citrus tones. It truly is one of the best winter ales out there.

Watch this nice review below from Massive Beer Reviews! 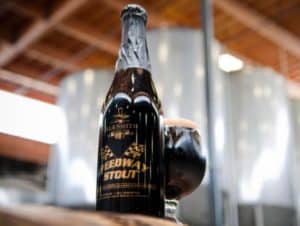 Alesmith Speedway Stout is another California brew (like Brown Shugga above), which is interesting since winters are (comparatively) mild there.

An American Imperial Stout with an impressive ABV of 12.00%, it is a great winter brew available throughout the year.

It has a startlingly dark “pitch black” color to it, with a light beige head.

Flavor-wise, it is characterized by sharp coffee and chocolate tones, tempered with roasted malt flavors. 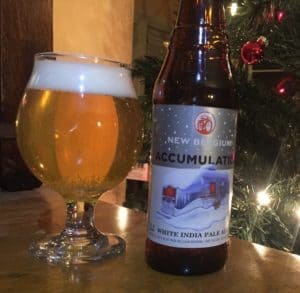 New Belgium Accumulation is a Belgian IPA out of Colorado.

With a modest ABV of 6.20% (for a winter beer, at least), you should expect to see it on the shelves around the fall.

Inspired by the winter snowfall in Colorado, New Belgium Accumulation is a white IPA that contrasts sharply with the dark beers typically brewed for the winter season.

In fact, its gentle fruit and citrus flavors almost make it summer-y in comparison to other winter brews. Good for variety! 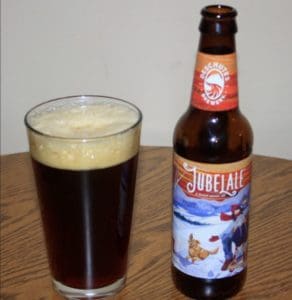 Deschutes Jubelale is characterized as a Spice Beer with an ABV of 6.7%. Drawing its flavor from a variety of hops and malts, it is a bold and complex ale with a distinctive “spiciness” – somewhat unusual for a beer, but fitting nicely with our winter list.

Dried fruit notes combine with its interesting herbal blend, making it go well with a variety of traditional holiday dishes. 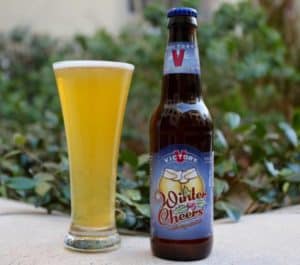 Winter Cheers is a Pennsylvania beer brewed by the famous Victory Brewing Company.

A German Hefeweizen with an ABV of 6.70%, it combines the best qualities of German and torrified wheat with oats, barley malts, and Tettnang and Citra hops.

All these ingredients come together in a delicious and warming blend with subtle citrus, banana, and clove flavors. Again, though fruity flavors are not typical in winter beers, some blends just work for winter – this is one! 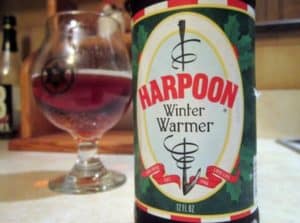 Harpoon Winter Warmer is a Spiced Ale with an ABV of 5.9%.

Rich and full-bodied, it has a spicy character to it due to its cinnamon and nutmeg flavoring.

The cinnamon is especially noticeable at first taste, particularly since there is no apparent aromatic hop that would otherwise cover up the spiciness.

Caramel and pale malts round up its blend without making it too rich for the palate. [1]

“I can sum this up in one word; Christmas. As strange as it may sound this beer reminded us of the Christmas season. Mainly it smells like gingerbread, nutmeg and cinnamon. Quite spicy yet really alluring. They hit the nail on the head with the bouquet of this one.” 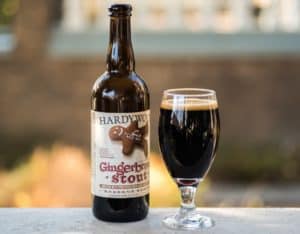 It has an ABV of 9.20%, and it usually starts to appear on the shelves around fall.

The Hardywood Gingerbread Stout derives its flavors from baby ginger harvested from Casselmonte Farm and sweetened with wildflower honey.

This rich and creamy brew also has hints of milk chocolate and vanilla, with cinnamon and ginger finishing it off. 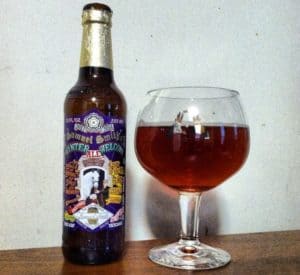 Like all good winter brews, it has a subtle hop aroma that never gets too intrusive, making it pair well with your standard holiday dishes.

Samuel Smith Winter Welcome has an ABV of 6.00%, which is pretty mild as far as Christmas beers go. 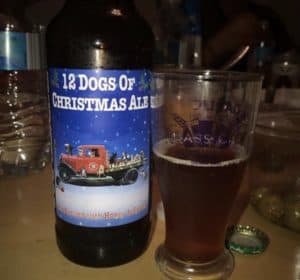 The curiously-named 12 Dogs of Christmas is a Winter Warmer by the Thirsty Dog Brewing Company out of Ohio.

It has an ABV of 8.30%, which matches well with the delightful blend of seasonal flavors.

Take a good chug of it and your mouth will be filled with a pleasant wash of toasted and caramel malt flavors, along with bold tones of honey, cinnamon, ginger, and nutmeg. One of the best winter beers you can buy today. 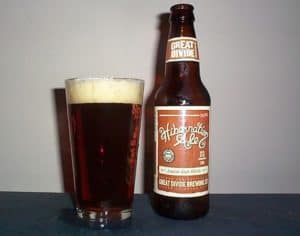 Great Divide Hibernation is an Old Ale with an ABV of 8.7%. It has a clean, almost lager-like quality to the aroma, with a distinctive malt flavor pleasantly accented with smooth alcohol and biscuit tones.

Various other flavors come to the fore as you are drinking it, among them chocolate, coffee, brown sugar, and an enigmatic smokiness.

A medium-bodied brew that leans just slightly toward fullness, it warms you up nicely as any good winter beer does. 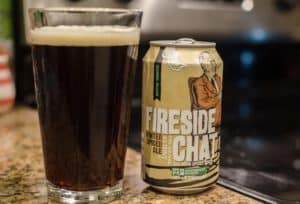 Also brewed in California (this is an interesting trend!), 21st Amendment Fireside Chat has an ABV of 7.90%.

21st Amendment Brewery’s take on the winter seasonal beer, this beer can be described as “comforting.” In terms of flavor, there is no mistaking the richness of the English-style ale that serves as its base. The addition of specially-selected spices takes this brew to the next level. Beer Advocate says it best:

“Like FDR’s Depression-era radio addresses, which were like a kick in the butt and a hug at the same time, our Fireside Chat is a subtle twist on the traditional seasonal brew. We begin with a rich, dark, English-style ale and then we improvise with spices until we know we have a beer worth sharing with the nation.” 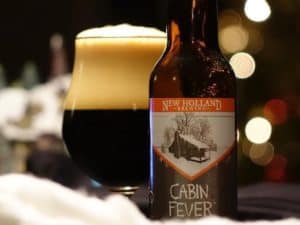 New Holland Cabin Fever is a proudly Michigan-made American Brown Ale with an ABV of 6.50%.

Smooth yet full-bodied, it has a robust blend of rye and raisin flavors highlighted with a light caramel sweetness.

Finishing off with a nice dryness, it goes well with hearty holiday fare such as stews and roasts. 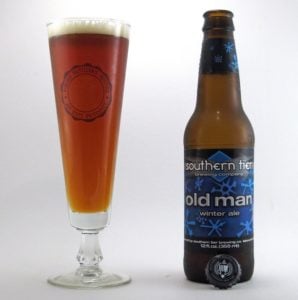 Southern Tier is an English Old Ale with an ABV of 7.50%. The ideal winter brew to put a spring back into your step when the weather turns cold, it has a complex array of barley and hops flavors in its reddish-brown brew.

Along with the distinctive hoppiness, the aroma also offers up hints of cinnamon, clove, and gingerbread, with all the ingredients coming together to produce the seasonal beer unlike any other. 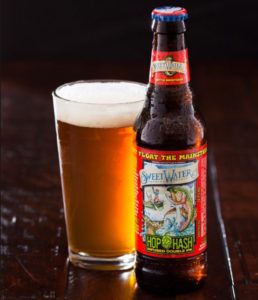 From out of Georgia comes a winter warmer that has a pretty solid ABV of 7.70%. Called the Sweetwater Festive Ale, it is a bold and full-flavored brew with more than a hint of spiciness.

Much of the flavor comes from Centennial and Golding hops, which are kept from getting too overbearing by the delightful cinnamon and nutmeg accents.

You also pick up enticing notes of roasted malt, dark chocolate, caramel, and even toasted woods. 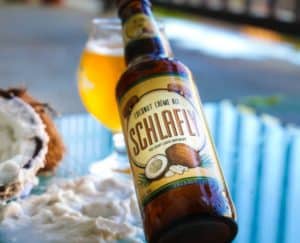 Schlafly Christmas Ale is a Winter Warmer with an ABV of 8.00%. Decidedly Christmasy in terms of flavor, it combines a welcome spiciness with a temptingly sweet aftertaste.

Like all good winter beers, Schlafly Christmas Ale boasts of an abundance of flavor tones, among them orange peel, juniper, cloves, and ginger.

Best Winter Beers: Warm Yourself Up!

Nothing quite compares to the richness and complexity of a best winter beer. The good news is that you can’t go wrong with any one of these fine cold-fighting beverages, so take your pick and enjoy one of the great things about winter – winter beers 🙂

If you can’t find these at your local store or if you’re into convenient home beer delivery, check out our recommendations on where to buy these beers online!