If the whole bottling thing is making you dread getting up in the morning fear not, there’s a better way: kegging.

You may never have considered kegging your beer before because you thought A) your little homebrew wasn’t worth all the bother and that B) the amount of “bother” was off the charts compared to bottling.

Fortunately, you’d be wrong on both counts. First of all, if you’ve taken all the time and energy to produce 5 or 10+ gallons of homebrew, it deserves a proper home.

One that allows it to be shared easily with the masses.  And second, compared to sanitizing 200 bottles by hand kegging is a walk in the park.

It just takes a bit of practice. 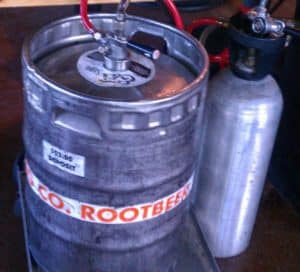 To Clean or Not to Clean? 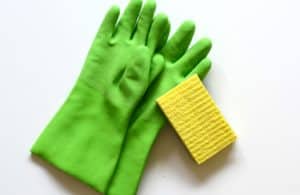 That is the question. If you bought a new keg and all new components, it’s probably not necessary to clean everything before using it.

On the other hand, if you bought used kegs and parts cleaning is essential.

The only way to be sure you’ve cleaned the keg thoroughly is to take it completely apart and clean each component.

“Cleaning your kegs shouldn’t be such a chore. After you do it a few times you will get the process down and have any jumper lines made up if needed.” 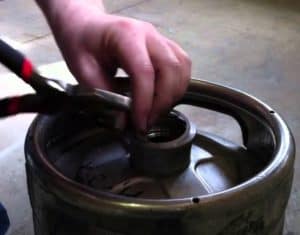 Start the process by depressurizing the keg. Your keg likely has a pressure release valve. If so, just use that.

If not take a screwdriver and press down on the gas-in poppet and hold it down until all the gas is released. Then remove the hatch.

Remove the O-ring around the hatch. Remove the connectors on top of the keg along with the dip tubes and all the O-rings associated with them.

As we said earlier if you bought used kegs you should replace all the O-rings as a matter of course. Don’t debate it. Just do it.

Once the keg is completely disassembled, go ahead and clean each component thoroughly.

For the keg itself, fill it with warm water and a mild dish washing liquid and let it sit for a few hours.

After that clean out the inside using a carboy brush, then rinse thoroughly. Reassemble and you’re ready to go.

3 Steps to Kegging Your Beer 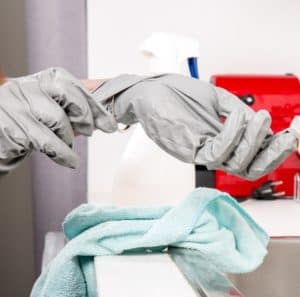 Before you can keg your beer you’ll need to sanitize your keg. There are a number of keg sanitizers on the market, and most will do a fine job.

Mix it in accordance with the instructions provided and then fill your keg with the sanitizing solution.

Next, you’re going to use the CO2 to force the sanitizer from the keg. To do so connect a length of tubing to the “liquid” connector and then attach the connector to the keg.

Place the open end of the tube into something that is large enough to hold the 5 gallons of sanitizer you’re about to expel from the keg.

Then connect your CO2 to the keg and set the regulator to 5 psi. The sanitizer will be ejected through the tube into whatever you’ve chosen as a collection vessel.

Continue until no more liquid is emitted from the tube and you hear the hiss of gas instead. Then turn off the CO2 and detach all the fittings. Your keg is now sanitized and full of CO2.

Step 2: Racking (transferring) Your Beer to the Keg 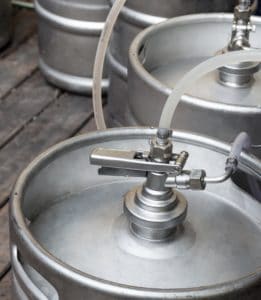 Pull the pressure relief valve on the keg until the internal pressure is equalized with the atmospheric pressure.

Connect one end of your racking tube to the liquid connector on the keg.

Next, attach another of your tubes to the gas fitting and let the free end drop into the sanitizer you just expelled from the keg.

Then start the flow of brew through the racking tube. As the keg fills, the CO2 inside will be displaced and you’ll see it bubbling up through the sanitizer.

Once the keg is full of beer, shut the CO2 valve. Your keg is now full of uncarbonated brew.

You are now ready to carbonate your master brew. To do that hook up the CO2 tank to the keg. Using the chart below determine the proper carbonation level, measured in this case, as CO2 “volumes.” [1]

If you don’t see your type of beer listed or you’re just not sure about the volumes for your particular brew, starting with 2.0 is typically a safe bet. Keep in mind too that the colder the beer, the easier the CO2 will dissolve.

This fact will affect the pressure level. 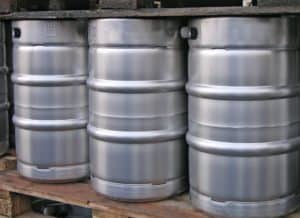 There are a number of “volumes-to-psi” calculators out there such as this one.

Use it to determine exactly what your CO2 psi setting should be.

Once you have the CO2 tank attached and have determined the proper volumes and psi set the regulator thus, turn on the CO2 tank and listen for the sound of the gas bubbling inside the keg.

This bubbling sound will continue for a while before slowing down and then stopping. This happens because, with the keg standing upright, there’s only a tiny surface area for the CO2 to dissolve into.

The key is increasing that surface area. Do that by placing a towel in your lap and placing the keg on its side on your lap.

Roll the keg gently back and forth. You’ll hear the bubbling sound start up again. Keep moving the keg this way until the bubbling stops and your beer is fully carbonated. Don’t try to draw off of it right away though.

It will be pretty agitated from all the rolling around so let it sit for a few hours and settle down before you hook it up to your beer kegerator.

Kegging beer is not as complicated as it seems. The keys are making sure your keg is clean and sanitized and that you carbonate your brew in accordance with the established CO2 volumes for your particular style. Be patient.

Follow the steps above and you’ll be serving your home brew from kegs at your next get together.