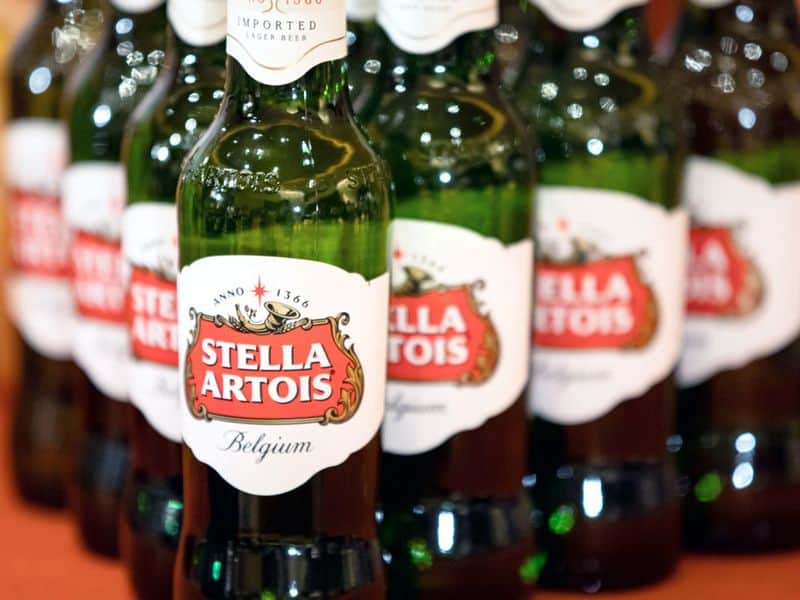 Stella Artois; it has a fancy ring to it. The name Stella Artois (stell-ah ar-twa) rolls off of the tip of your tongue, and you cannot help but feel ultra-fancy when you say that name. Or, is it just me that loves the way it sounds? I think not! Stella Artois is a classic Belgian beer despite its name having a very French sound.

With over 100 different kinds of beer in the world; from lagers, ales, IPA’s, stouts, pilsners, and so on, it can be tough to know what kind of beer you are drinking and what it means. We’re here to answer all those questions you may have about Stella Artois.

What kind of beer is Stella Artois?

Stella is considered a European Pale Lager. See, the thing about this tricky beer categorization is that some beers classify as a lager, and as a pilsner. Stella Artois is classified as European Pale Lager because of the way it is brewed. It has a beautiful light golden color like most pale lagers and comes equipped with a perfect amount of foam. So, Stella is a widely popular beer that pairs well with food and the company of friends as it is one of the top ten beers drank by people in the United States of America, (according to statistics by YouGov ratings.)

Stella Artois is considered to be a pilsner by some, but here is a quick backstory on that. To determine whether it is a pilsner or a lager, you need to know a few things. A pilsner is a lager, but it is a kind of lager that has been adapted later – compared to the traditional style lagers. Pilsners are pale lagers that are often light or golden in color and produce a large amount of foam when poured into a glass. Dark lagers differ in the fact that they are extremely dark (almost black). Furthermore, they produce very little foam, unlike the pilsner.

Some people do not realize how closely pilsners and lagers are related. In fact, It is common to think they are very unrelated to each other due to the difference in taste and appearance. Despite the dark and light colors of each, brewing processes are very similar for lagers and pilsners besides that. Pilsners and lagers both use cold fermentation processes and have longer storage periods than other types of beer or ale. Cold fermentation processes and longer storage periods equate to the high quality of flavor and longer shelf life of this style of beer.

The main ingredients of the classic Stella recipe include three major components. Saaz hops, malted barley, and water. Those ingredients give the beer an extraordinary balance of sweetness, bitterness, and a very hoppy aroma.

Stella Artois is owned by the Anheuser-Busch company and is distributed worldwide. Anheuser-Busch InBev is the world’s largest brewer. They own over five hundred brands of beer. Anheuser-Busch and InBev merged in 2008 and thus became the largest international beer brewing company in the entire world. The brands of beer that they own are sold in over 150 countries. AB InBev takes pride in its work and employs over 200,000 people in 50 countries.

Where Is the Stella Artois Brewery?

Stella Artois has a brewery and restaurant right in the heart of Leuven, Belgium where it was first created. At the brewery, you and your guests can experience a guided historical and informational tour of the facilities, witness how the brewing takes place, and learn more about the brand name. At the end of the tour at the brewery, you will have the option for a tasting, and get to visit the gift shop and of course; buy beer to bring home to your family and friends directly from the brewery itself!

Is Stella More Popular Than Heineken?

Stella vs. Heineken is a battle that seems to have been taking place for quite a while. Which beer is truly better? As far as sales, it is evident that Stella Artois can’t compete with Heineken. But that is partly because Heineken is much more massively produced and distributed all over the world.

Stella Artois may not be selling 25 million beers per day, but they have ranked as one of the most consumed beers in the United States, and they also were the winner of the 2019 World Beer Award for the World’s Best International Lager. Heineken is cool, but Stella Artois also deserves some credit. Belgian beer has been widely produced for about 1000 years, and with Stella considered a classic Belgian lager, you can’t go wrong.

What Is the Current ABV of Stella?

The ABV of Stella Artois has had a bit of an “identity crisis” throughout the years. According to Stella Artois’ website, the current ABV is 5.0% (2021). The number has fluctuated over time, and in and out of countries. At one point in the United Kingdom, the ABV was allegedly down to 4 percent from its initial 5.2 percent, which made many people, very, very unhappy. If you are looking for the strongest Stella, I recommend the Midnight Lager. It weighs in at 11.2 fl oz per bottle, has an ABV of 5.4%, and has zero grams of sugar, which is an added perk!

The Stella Artois brewery was formed about 600 years ago in Leuven, Belgium, and was known as Den Horen. If you know anything about Belgian beer, you will know that Belgians take their beer quite seriously, and have been doing this for hundreds and hundreds of years. Stella Artois is proud of its roots and has been brewing since the year 1366. The designs on their bottles even feature the year across the top of their logo. It reads, “Anno 1366”.

The original Stella Artois however, was first brewed and introduced to the public in the year 1926. It was first launched as a specialty Christmas beer. Stella was initially made for the holiday season and was named after the Christmas star otherwise known as the Star of Bethlehem. Beer does after all have some very significant and religious roots. Most of the earliest beers brewers in Belgium were monks and very religious and spiritual people who wanted to raise money for their churches.

Who was Sebastien Artois?

Some 200 years or so later, Brouwerij Artois launched the Christmas beer in 1926, which became the Stella Artois that we know and love today. Eventually, the popularity of Stella increased so much so that by 1960 100 million gallons of it were being produced annually. In 1964, it was being shipped all over Europe and quickly rose to fame.

What is the Stella Artois chalice?

When thinking of a chalice, it is easy to think of something regal or royal; perhaps even a King. Stella Artois has been served in a classic Stella Chalice for many years, and it is a symbol of Belgian tradition. Stella is served worldwide in the beautiful glass chalice and are instantly recognizable. Drinking the beer out of the ever-popular and famous chalice is part of the Stella Artois experience. If you don’t have a chalice, it is okay; you can still drink your Stella! You just won’t be drinking it in the most traditional sense.

What Is the Pouring Ritual for Stella Artois?

According to the Stella Artois website, there is a very specific way you need to pour and drink your beer. There is a special Three-Step Ritual that can be performed when pouring your beer. The three steps are 1. The Pour, 2. The Skim, and 3. The Presentation.

The ritual includes pouring the beer 1 inch away from the tap into the glass. The beer must be poured at a 45-degree angle (this is very important). You will need to straighten your glass or chalice as it becomes full. You will not want to overfill the glass. As it straightens, you will notice the foam building up in the chalice. After that, you can skim the top layer of foam off the chalice. That will create a pristine and astonishing look. Present your perfectly poured and skimmed beer on a Stella Artois coaster, and now you will have created the perfect Stella Artois experience!

How Is Stella Artois Helping People Affected by the Pandemic?

Stella Artois partnered with the James Beard Foundation to create the, “Open For Good” Campaign. The main goal of the “Open For Good Campaign” is to help restaurants that were dramatically affected by the COVID-19 pandemic keep their doors open and keep their businesses flowing. The company created a special kind of bottle that when sold, will help support restaurants in need. For each bottle sold, Stella Artois will donate $0.50 to the campaign, and donate to independent restaurants in need.

Overall, Stella Artois is very good European Pale Lager. Belgium is known for having good beer and Stella does not disappoint. I mean, there’s a reason it’s one of the best selling lagers in the world. If you’re looking for a new beer to try or if it’s been awhile, grab a 6-pack, kick your feet up and enjoy!

If you’re interested in other beers, check out our article on the Top 5 Voodoo Ranger IPA’s!