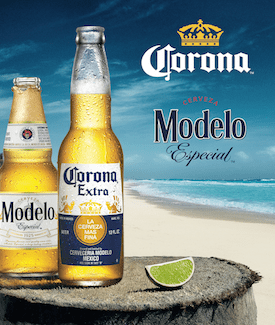 Corona and Modelo are the number one and number two selling Mexican beers in the US, respectively. You’ve likely had a Corona and a Modelo and noticed their similarities. If not, in this Corona vs Modelo comparison we are going to cover those similarities and differences and discuss which is better.

If you’re interested in learning more about the history, taste, price, abv, and nutritional information of either Corona or Modelo, then you’ll want to keep reading. As a note, this is a comparison between Corona Extra and Modelo Especial.

Both of these beers share similar beginnings as they were both originally brewed in 1925 at the Grupo Modelo distillery. Anheuser-Busch InBev, the producer of Budweiser, Bud Light, Busch and other well known beers, acquired Grupo Modelo in 2013. Now both beers are owned by the largest conglomerate of beer brands in the world; however, both Modelo and Corona are still produced at the Cerveceria Modelo brewery.

Corona Extra was the first style of Corona to hit the market and is their base beer. In 1979 Corona was first available for purchase in the US. Just less than 20 years later it became the top selling imported beer in the US. Since 1998 it has not given up that title and has no plans to.

We can’t talk about the history of Corona without bringing up the coronavirus. There were reports that came out in 2020 presenting the idea that people were no longer buying Corona Extra due to the similar name as COVID-19 (coronavirus). While their sales did dip in China, Corona reported an increase of 8.9% in sales throughout the first 3 months of 2020. So, the similar names did anything but hurt their sales.

From here on out, when we mention Corona, it will be in reference to the beer. We promise.

Like Corona, Modelo was first bottled in 1925, but it wasn’t introduced to the US until 1990. Even with a later start, Modelo has found themselves as the 2nd best selling imported beer in the US. As we mentioned, both Modelo and Corona are brewed at the same location.

There are three different kinds of standard Modelo. Modelo Especial, Modelo Light, and Modelo Negra. For the sake of this article, we will focus on Modelo Especial.

Corona and Modelo are very similar beers. Outside of being the #1 and #2 best selling imported beers in the US, they share a similar taste, color, reputation, and history. However, they do have their differences.

There is a reason Corona vs Modelo makes for an interesting comparison. They share a lot in common. They even have similar make-ups of water, barley malt, non-malted cereals, and hops. However, they do have their differences that result in different tasting beers which we’ll get to next.

While these two beers have similar tastes, there are slight differences that create a world of difference – at least for me.

The best way to describe a Corona is light and crisp. There is a reason Corona brings about thoughts of summer, sunshine, and beaches – a cold Corona on a hot day is one of the most refreshing things there is.

Add a lime or lemon to bring out some extra flavors. While it is very popular in the states to add a lime, not many know that a lemon wedge may work better. Personally, I usually use lime because I have them in my fridge. However, I discovered the Corona and lemon years ago as I was traveling in Italy and loved it!

Many people out there prefer Modelo to Corona. The reason being that Modelo is often described as more full and rich. Typically, Modelo is served with lime. I have yet to have a Modelo with a lemon wedge, but I’d guess it have a similar effect.

When it comes down to taste, too much of it relies on personal preference, so if you really want to know which tastes better, then you have to go out and buy it for yourself. That doesn’t mean I can’t share my opinion, though.

If I’m sitting on my couch drinking a beer, I would give a slight edge to Modelo. It just has more flavor and richness than Corona. However, if I’m out in the sun or just got done with some laborious physical activity, I’m largely in favor of Corona. It’s just a more refreshing beer. Whether that’s due to the actual taste, marketing, or anything else, I’m not sure.

A 6-pack of Corona and Modelo cost about the same, ~$10, so price shouldn’t be much of a difference make here.

How to Drink Corona and Modelo

Obviously, there is the staple lime that is added to Mexican beers, especially Corona and Modelo. However, as I mentioned before, adding a lemon to Corona or Modelo is a solid option that is more popular in European countries.

One of the best things about Mexican beer is the versatility. You’d think there aren’t that many ways you can drink a beer, but Corona and Modelo offer great options for beer cocktails. Below are some of the best options:

Drink a couple ounces of your Corona Extra, down below the neck. Add a shot of tequila, a splash of orange juice, grenadine, and lime. This is my favorite drink that is very easy to make at home. I almost always have OJ and tequila in my fridge and freezer, so when I have Corona this is an easy drink for me to make. You don’t need grenadine for this drink to be delicious either.

This Recipe calls for a mix of Modelo with rum, liqueur, lime juice, and bitters. If you like Modelo and rum, go ahead and give this concoction a try!

Add prickly pear puree, lime juice, and dried hibiscus flower with a bottle of Modelo to a glass and enjoy a Mexican beer cocktail favorite.

At the end of the day, Corona vs Modelo is an interesting comparison due to their similarities, but it’s their differences that will help you determine which is better. The best way to figure that out is to buy them yourself.

With all that said, Corona and Modelo are the #1 and #2 most imported beers in America and for good reason. Both are extremely refreshing and well tasting beers. They also have versatility that isn’t found in many American beers. Mexican beer cocktails are a fantastic creation, and we highly recommend you try one of the options on our list, or even one we didn’t mention!

If you’re interested in all kinds of beer, check out our page on Beer of the Month subscriptions

Below are common questions asked about Corona and Modelo. Most of these are answered in the article above.

Which Is Better, Corona vs Modelo?

This ultimately comes down to personal preference. They are both quality beers enjoyed by millions around the world. For us at 52 Brews, we give a slight edge to Modelo on taste alone, but find Corona to be more refreshing.

Corona Extra is stronger than Modelo Especial. Corona is bottled at 4.6% in comparison to the 4.4% of Modelo.

Does Corona own Modelo?

However, in the US, the beers produced by Grupo Modelo are distributed by Constellation Brands.