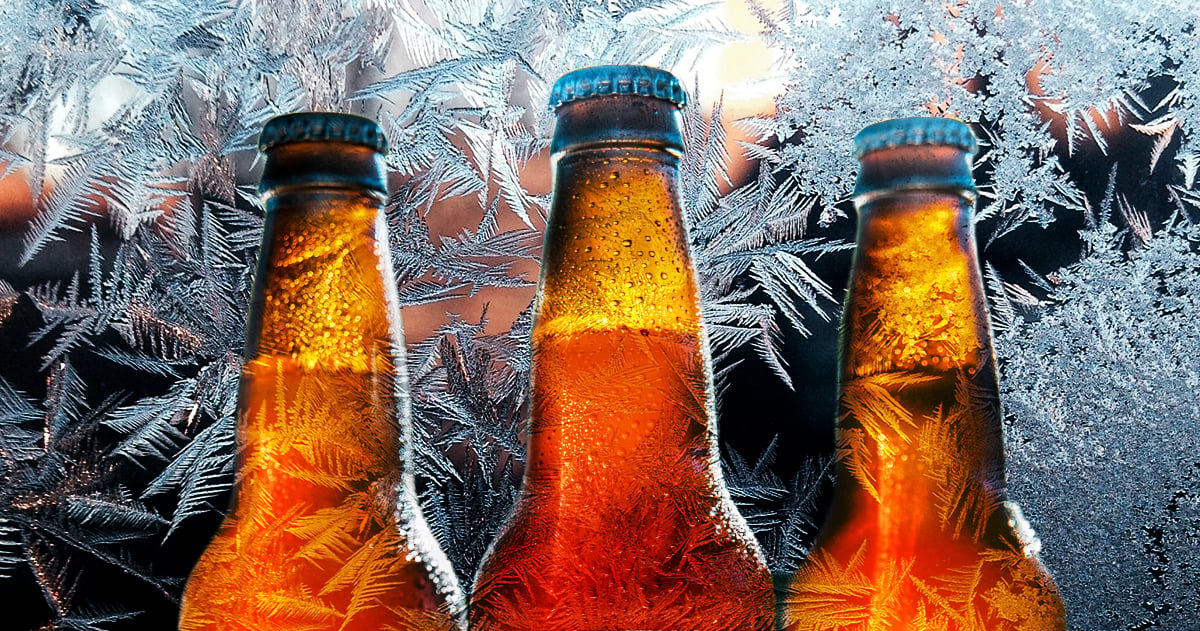 So, you’ve just got back from the store with a case of beer, and you’re excited to crack a cold one. However, the beers aren’t quite cold, what do you do? You can throw the beers in the fridge and wait awhile, or you can quickly cool down one or two by letting them sit in your freezer. It’s simple and quick, but it does have its risks. Most of us have probably left a beer in the freezer too long and exploded a beer.

In this guide, we’re going to give you all the information you need, so you don’t ever explode another beer in your freezer again. If you know how long it takes beer to freeze and if you know what temperature beer freezes at, you can avoid a lot of mess.

What Temperature Does Beer Freeze?

Alcohol, or ethanol, doesn’t really freeze…. well, it does, but at a whopping -173.5 degrees Fahrenheit. That’s why you can place your bottles of vodka, tequila, or other liquor in the freezer without the risk of turning it to slush. However, beer only contains 4-6% alcohol on average. The rest is mostly water. If you paid attention in elementary school, you should know that water freezes at 32 F, or 0 C.

Most beers, then, will freeze just below 32 F. What temperature, exactly? Well, that depends upon the ABV of the beer. A vast majority of beers, let’s say from 4% to 8% abv beers, will freeze in the 29 – 27 degree range. However, a 10%+ ABV beer will freeze below 25 degrees Fahrenheit.

The temperature at which beer freezes is directly related to its alcohol percentage. This is something to keep in mind when you cooling your beer in the freezer. Am I putting a 4.2% Coors in the freezer, or an 8.5% Voodoo Ranger IPA? The answer will determine how long and at what temperature you can store your beer.

How Long Until My Beer Freezes?

Just as the ABV of beer determines the temperature it freezes, it also determines the time it takes until your beer freezes. A light, domestic beer will freeze in 2-3 hours, while a stronger beer such as an IPA may take 4-6 hours.

However, you’re not putting your beer in the freezer to freeze it. You want to cool your beer off as quickly as possible. So, how long does it take to chill a beer in the freezer? If we assume you’re beer is at room temperature, it should take roughly an hour for your beer to reach an optimal temperature. Light lagers are usually served cold at about 35 degrees, craft beer from 40-45 degrees, and porters and stouts are often served warmer at around 50 F.

One hour in the freezer should take your beer to right under the 40 degree F mark. However, do you really want to wait 1 hour to enjoy your beer? Let’s talk about some ways we can get a cold beer in your hand quicker.

Best Way to Chill Your Beer

We’ve agreed that an hour is too long to wait for your beer to get cold, so how can we cool your beer quicker? There’s two easy ways to make sure your beer is as cold as possible as quickly as possible.

First, keep a beer glass in the freezer. If you have an ice cold glass ready, you’re beer will get colder in the glass and stay colder longer. The Host Beer Glass is my favorite as the silicon grip keeps your hand from getting too cold and provides a good grip.

Second, you can wrap a wet paper towel around your beer before you stick it in the freezer. The water in the towel will get cold very quickly. As it does, it’ll cool your beer down with it. Instead of waiting an hour for your beer to get cold, it should take 20 minutes or less. Pour your beer in a glass from the freezer, and you’ll have an ice cold beer in no time. Remember to set a timer on your phone so you don’t forget your beer!

What Happens If My Beer Freezes?

There are a couple things that can happen if your beer freezes. First, is that it may explode. When water freezes, it expands, and since beer is mostly water, it can cause enough pressure on the can to burst open. Not only do you lose a beer, but you are also stuck cleaning up the mess. If you do leave a beer in the freezer, hopefully it’s just one.

Second, there’s a chance your beer doesn’t explode at all, and instead, you’re stuck with a mostly frozen beer. While you won’t have a mess to clean up, it will likely render your beer flat and tasteless. When the beer freezes, carbonation escapes the beer – which often causes the explosion. If you wait ’til your beer thaws out, it will no longer be carbonated and not very good.

Lastly, maybe you didn’t leave your beer for too long. Instead of being mostly frozen, it could be described more as a slushie. Wait for it thaw out, and take a sip. From there, you can decide whether or not your beer is worth drinking. Another option is to pour the beer in a glass. This may even make your beer stronger since the ice left behind will be water, not alcohol.

What Should I Do With My Frozen Beer?

Just because you’re beer froze does not render it totally useless. If the can explodes, you should throw it away. You don’t want to drink shards of the metal can. However, if the can is intact, you can use the beer for cooking purposes, slushies, popsicles and more. At the end of the day, throwing it away may be the best option, but there are fun ways you can make use of it!

Putting Beer in a Freezer: Conclusion

If you want to chill your beer quickly, putting it in the freezer is the best option. You can wrap a wet towel around the beer, and place a beer glass in the freezer for optimal results. However, placing beer in the freezer is not without risks. If you forget the beer in there for many hours or overnight, it will freeze. Once it freezes, it will lose carbonation and flavor, and you’ll be lucky if just that happens. You are also risking the beer exploding and causing a mess in your freezer.

The best thing you can do is set a timer on your phone for an hour. One hour is plenty of time for your beer to reach an optimal temperature, and not nearly enough to cause your beer to freeze. You should be able to pull your beer out in less than an hour, especially if you use the towel trick, but if you let it sit for the full hour, it’ll be okay.

Below are frequently asked questions about putting beer in a freezer. Many of these are answered in the article above.

How Long Does It Take for Beer to Get Cold in a Freezer?

If you’re beer is at room temperature, one hour should be plenty of time to get your beer cold. Wrap your beer in a wet towel and place a beer glass in the freezer to make things quicker. When you get to the 2 hour mark, you begin to risk freezing your beer.

How Long Does it Take for Beer to Freeze?

The higher the ABV, the longer it will take your beer to freeze. Beers with a 4-6% ABV can freeze in as little as 2-3 hours. An 8% beer may take as long as 4-6 hours to freeze. To be safe, never leave a beer in the freezer for more than an hour, and you’ll be safe from frozen or exploding beer.

What Happens when Beer Freezes?

Beer is mostly water, and when water freezes it expands. CO2 is also released which will make your beer flat. Worst case scenario, the expanding ice and release of gas will cause increased pressure to the point of bursting the can.