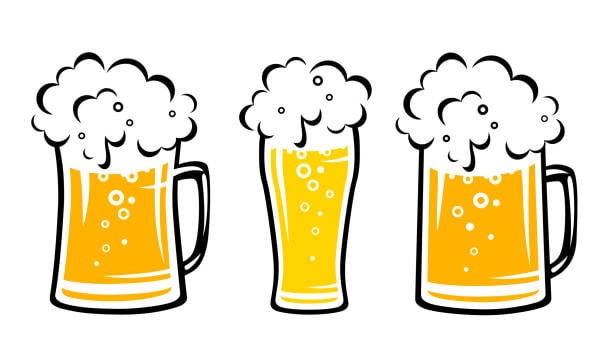 Confusion about pitchers of beer and their size is common in America because they come in different sizes. Most commonly, a pitcher of beer will be 32, 48, or 60 ounces.

History of Pitchers Used for Beer

Beer has been poured and drunken out of pitchers for centuries. The word pitcher comes from the word picher, an English word for jug dating back to the 1200’s. Outside of the US, a pitcher of beer will be referred to as a jug of beer.

Pitchers and jugs have been used since the beginning of time to carry water and other resources from one place to another. Pitchers of water, empty pitchers, and jugs are mentioned throughout the bible, and as we can imagine, were used way before those times as well.

What is Beer Poured in?

The world of beer can be confusing. Even more so when you mix in the intricacies of glass ware and containers. I mean, porters and stouts have their own type of glass to be poured into. English ales have different glasses than a Belgian ale or a pilsner. Some beers are poured into a 10 ounce glass, or maybe 12, 16, 20, or 23 ounce glass. There are different sized pitchers, growlers, crowlers, and even beer towers, so let’s talk about what goes into what.

What Beer Uses a 10 Ounce Pour?

Have you ever ordered a beer, expecting 16 oz, and it comes out with 10 oz? A 10 oz pour is typically utilized for much stronger beers. Imperial IPA’s and stouts are two types of beer that are much stronger than your usual 5%. Beers labeled as ‘imperial’ will generally be 8% ABV or higher with many of them getting up to 10-16%. There are beers stronger than that, but most ‘double’ or ‘imperial’ beers will fit into that range.

Restaurants, bars, and breweries want you to have a good time, not black out. That’s one of the reasons they typically won’t serve you a 16 oz 12% beer. A beer of that size and ABV contains 1.92 oz of alcohol – more than 3 shots! Check out our guide on How Many Beers Equal a Shot to read more about ABV! Furthermore, it costs brewers more money to make beer at such a high alcohol percentage, so it’s a way to keep profitable margins!

The other standard beer sizes you’ll see served are 12, 16, 20, and 23 oz pours. A 12 oz pour is most common when you order a beer that’s not on tap. The bar only has glass and bottle beer of what you ordered, so they will bring the beer and a glass out to you. However, you may get lucky if the bar has 16oz cans in stock.

A 16 oz pour is most common when it comes to ordering a beer on draft. 16 oz is the standard size for most beer glasses, so this is what you’ll likely receive. The other two sizes, 20 and 23 oz, are likely their ‘large’ sizes on the menu. It’s typically meant to be a win-win. The bar is able to charge you a couple more dollars than a 12 or 16 oz beer, and you end up spending less money per oz.

How Many Beers Are in a Pitcher?

We mentioned earlier that there are 3 standard pitcher sizes – 32 oz, 48 oz, and 60 oz. How many beers should you be able to pour from these pitchers and how many people does it serve?

How Many Beers in a 32 Ounce Pitcher?

Most pitchers are sold with lighter beers – ones that are 4-6% on average. So, let’s imagine that you are going to pour either a standard 12 or 16 oz glass. A 32 oz pitcher of beer will provide you with two pints- or 16 oz beers. If you elect for a 12 oz pours, there will be 8 oz left. Ultimately, the 32 oz pitcher is best used to serve one, maybe two people.

How Many Beers in a 48 Ounce Pitcher?

How Many Beers in a 60 Ounce Pitcher?

A 60 oz pitcher holds five standard 12 oz beers in it. If you elect to go for 16 oz pours, there will be 12 oz left after three pints. If you’re ordering a pitcher of beer, I’m going to assume you plan to have more than one. While one person can certainly take down a pitcher by themselves, the beer may get warm towards the end. A 60 oz pitcher best serves 2-5 people.

How Many Beers Are in a Pitcher Summary

The most important thing to do before ordering a pitcher of beer is to find out what size pitcher they serve. There are three standard pitcher sizes – 32, 48, and 60 oz. The last thing you want to do is order a pitcher for your group of 4 people and have them bring out 32 oz. Find out what size their pitcher is first, and then order accordingly!

However, if you’re looking to drink a little more, there may be a better option for you: a beer tower!

What is a Beer Tower and How Many Beers are in it?

A beer tower is exactly like it sounds – a tall, cylindrical cannister filled with 3 liters of beer! There are just over 33 oz of beer in a liter, so a beer tower holds 100 oz of beer. One of the benefits of many beer towers, is that the beer will stay cold. MOST beer towers sold at restaurants will have a compartment filled with ice running through the middle of the tower. This means you can take your time enjoying your beer tower outside without the fear of drinking hot beer!

A beer tower holds eight 12 oz beers with 4 oz left over! If you elect for 16 oz pours, a beer tower holds 6 pints of beer with 4 oz left over. A beer tower has a couple advantages over a pitcher. First, the beer will stay colder (if it has the ice compartment). Second, you have more beer! This saves the bartender from having to constantly refill your pitchers. However, you better make sure you like the beer you order. Getting stuck with 100 oz of beer you don’t like can be brutal.

HERE is a beer tower from BeerSquad on Amazon that is sold with the ice tube!