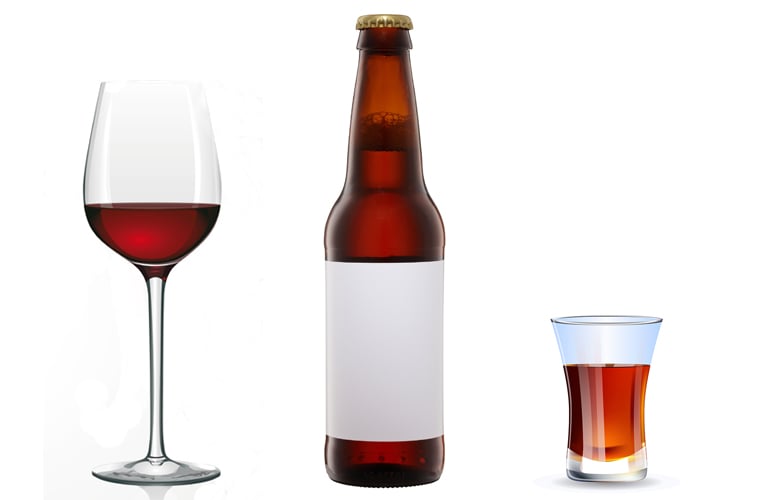 When you’re drinking at a bar, you’ve got options. You can sit back and drink some beer, try out some new IPA’s, stouts, sour beers, and much more. Or you can take things a different direction. Whiskey coke, vodka lemonade, margaritas, or other mixed drinks are popular options. And lastly, you can take shots. Well, when you go out to a bar with a bunch of friends, you’ll likely have people trying all three of these methods to get a little buzz going.

At some point, you may try comparing who’s drunken most throughout the night, but how do you do this when you’ve been drinking beer and your buddy vodka. That’s why we’re here to help you figure out how many beers equal a shot.

How Much Alcohol is in a Shot?

Before we can answer this, let’s talk about what we mean by a shot. We all know what a shot is, but there are many different kinds and sizes out there. For the sake of this guide, when we refer to a shot, we are talking about a standard 1.5 oz shot of 40% ABV or 80 proof liquor. So, how much alcohol is that?

How Much Alcohol is in a Beer?

This is a little more complicated because beer varies more greatly than liquor, especially at bars. Vodka is typically 40% abv and a shot is 1.5 oz. Beer, however, ranges from 4% to 12% and it’s served in a 12 oz or 16 oz glass. That’s not to say liquor doesn’t have a wide range of ABV, but the popular liquor served at bars is usually 80 proof.

One Beer is Equal to One Shot

What is ABV and Why Does it Matter?

There are two things that determine the alcohol content of a given drink. First, the volume of the liquid. Whether it’s 1.5 oz, 5 oz, 12, 16, or anything else. Second, is the ABV. ABV stands for alcohol by volume. To put it simply, it’s a percentage of how much alcohol there is in comparison to how much liquid there is.

How Much Alcohol is in an IPA?

For a 1.5 oz shot to equal one of these IPA’s, it would have to have 85% ABV. There are only a couple spirits out there that strong, and you probably don’t want to take a shot of them.

Even a 12 oz glass of an 8% IPA would have .96 oz of alcohol, so if you’re looking at getting a buzz, drinking an IPA might be the best way to do it.

Do You Get Drunk Quicker from Shots of Vodka or Beer?

As we’ve discussed, this wholly depends upon the type of beer and liquor you are drinking. However, if we take the standard drinks, a beer and a shot will get you equally impaired. However, shots have the ability to get you drunk quicker than beer because you can drink them quicker. It usually takes 15+ minutes to drink a beer (when sipped at a normal pace) whereas a shot can be thrown back in mere seconds.

If you take a shot every 15 minutes vs drinking a beer every 15 minutes, the results will be the same. Taking shots does give you the ability to take more in a smaller time frame, so it is easier to get drunk quickly taking shots.

How Many Beers Equal a Shot – Conclusion

When it comes to your standard drink, a beer, glass of wine, and a shot all contain the same amount of alcohol, 0.6 oz. However, this is just your standard drink. If you’re drinking 100 proof or 50% ABV liquor, there will be .75 oz of alcohol. A double shot of 40% liquor would be 1.2 oz. So, it greatly depends on the size of your beer or shot and the ABV of your beer or shot.

However, when you’re out at a bar, most of the shots available will be standard 1.5 oz and 40% ABV. If this is the case, one beer is likely more than one shot. If you’re to order beer, it’s likely going to come in a 16 oz glass. Any beer that is 4% ABV or higher, will have more alcohol than a shot. Next, if you are to take into account stronger beers such as IPA’s, there’s a possibility that one beer is equal to two shots.

Beer or Shot? Try a Boilermaker

If you’re trying to decide between getting a shot or a beer, why not get both? A boilermaker is a beer cocktail that mixes a shot into a beer. Now, I know this may not sound very good, but you’ll be surprised at how good a boilermaker can be. In fact, you may have had one or two in your life before.

Boilermakers, the drink, comes to us from actual boilermakers – men who built and repaired boilers for industrial trains and ships. After a long days work they’d head to the local pub and get their favorite drink. A beer and a shot.

Below is a list of some of the most popular boilermakers for you to try.

Below are frequently asked questions concerning the alcohol levels of beer vs shots. Many of these have been answered in the article above.

How Many Beers Equal a Shot of Vodka?

Is a Shot Healthier than Beer?

What is a Boilermaker?

A boilermaker is a shot of liquor dropped into a beer. An Irish car bomb is a form of a boilermaker. Not all boilermakers are meant to be chugged either. You can simply sip the beer after pouring the shot in.

How Many Beers Equal a Shot of Whiskey?

One beer is equal to one shot of whiskey. This is taking into account that the whiskey is 80 proof and comes in a 1.5 oz shot glass. Also, that the beer is 12 oz and 5% ABV. However, whiskey is often higher than 80 proof. If you’re drinking 90 proof whiskey (or something higher), it’ll contain more alcohol than a standard beer.