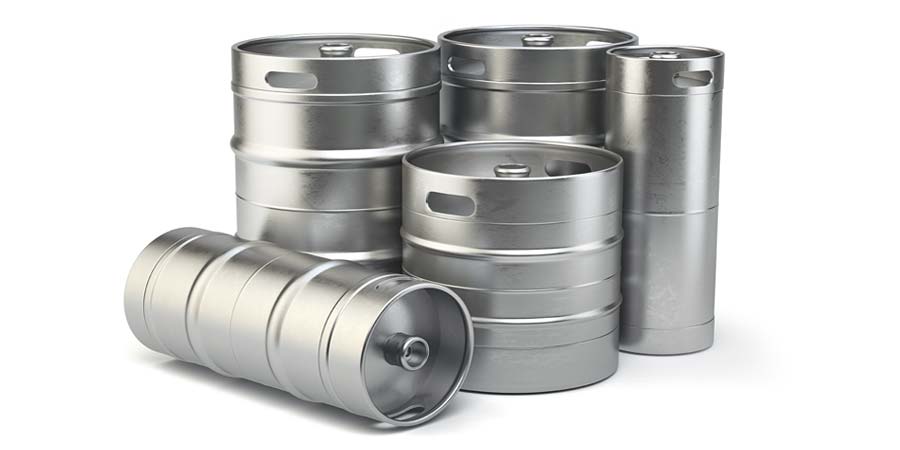 Whether it’s for a large party or you just prefer your beer on tap, having a keg is both useful and fun. However, there are some misconceptions about kegs. Traditional economics tells us that it’s cheaper to buy in bulk. So, we’d assume that buying a keg would be cheaper than buying a whole bunch of 30 racks. However, this isn’t necessarily accurate. The beer itself will be cheaper out of a keg, but this doesn’t account for the cost associated with renting and using a keg, or of buying/building a kegerator.

Before we get too deep into other costs, let’s take a look at the real reason you are here. How much does a keg cost? How many beers are in a keg? These two questions are the focus of this article, and the answers are going to depend greatly on the size of the keg and the type of beer.

There are multiple sizes of kegs out there. When it comes to choosing the right size, there are a couple of things you need to consider. How many beers do I need? Do I want multiple types of beer? How many taps do I have? How much room do I have in my kegerator? If you’re buying a keg for a kegerator, you may have different questions and answers than if you’re buying a keg for a party. Let’s take a look at the different keg sizes.

Half Barrel Keg Price and Volume

A half barrel keg is probably what you picture when you think of a keg. It’s the largest common keg out there, and it gets its name because it’s half the size of a barrel of beer. How much exactly is that, though?

The price of a keg will depend on the store and location. However, the primary difference in price is the beer. At my local Total Wine, half kegs range from $98 to $195. A keg of Bud Light and PRB are the cheapest with Miller, Coors, and Michelob right behind them. The most expensive kegs include Odell, Stella Artois, and Bell’s Oberon Ale.

How Much Do I Save by Buying a Keg?

However, you’ll have to pay a deposit on the keg, but you can get that back once you return the keg. Some places will also rent you a tap handle and pump as part of the deposit. Others you may have to pay a small fee to rent. In addition to this, you’ll have to pay for a lot of ice to keep the keg cold, especially if you plan on having your keg out in the sun.

If you’ve paid attention and can do some basic math, you know by know that a quarter barrel keg is half the size of a half barrel keg. So, a quarter barrel keg holds 7.75 gallons which is equivalent to just over 82 beers. Again, at my local Total Wine, quarter kegs run from about $75 to $120.

At this price, you really aren’t saving much on the beer itself, but there are benefits to a quarter barrel. First, if you are having a party, it’s not a bad thing to have multiple types of beer on tap. While it’d be much cheaper to have a full keg, having bud light and an IPA or craft beer on tap isn’t a bad option either. Second, most kegerators or keezers cant fit a full keg along with a CO2 tank, so quarter barrels are much more common than half barrels when it comes to at home kegerators.

Sixth barrel kegs are most common in two-tap or three-tap kegerators. Their size makes them ideal to fit together in small spaces such as a minifridge or freezer chest. At 5.16 gallons, it holds 56 beers. Sixth Barrel Kegs usually run between $50 and $100 with your light beer coming in closer to the $50 mark.

If you’re drinking light beer, it’s certainly cheaper to just get buy the beer by the case, but that’s not the real value of sixth barrel kegs. As we mentioned, these are primarily used in your at-home kegerators. These are best used when you’re looking for more variety on tap. If you have a 3-tap set-up, you may have the option of using two quarter barrels or 3 sixth barrels. it’s really all about what your kegerator can fit and your personal preference.

Cornelius Kegs are also known as homebrew kegs because their primary purpose is for kegging your own home made brew. So, you’re not likely to find bud light for sale in a Cornelius keg. and there’s a reason for that. A Cornelius keg comes in at 5 gallons. So, if you’re looking to put a keg on tap, you’d simply buy a sixth barrel.

5 gallons is the most common volume of beer used for homebrewing, so this keg is perfect if you’re looking to put your own beer on tap. Not only do you get the benefit of having your own beer on tap, but you also get to skip the tedious bottling process. You can purchase the 5 gallon homebrew keg on Amazon.

Mini kegs are exactly like they sound: small. They are best to serve 2-4 people as they hold 1.32 gallons, or 14 beers. A lot of times they are sold with craft beer, or some seasonal beer. Finding them with the exact beer you are looking for may be difficult, but mini kegs do have some utility.

First, a mini keg can be useful for boating or camping as it limits the amount of trash and beer cans you’ll go through. Second, it can be a fun mix-up from your typical case of beer. Having a little mini keg on tap is just something fun and different.

How Long Do Kegs Last?

This is another thing to keep in mind. Kegs that are not connected to CO2, and instead use O2 pumps, will only last for about a day. So, if you’re having a 10 person party, you’ll likely waste a lot of the beer you purchased. That is unless you’re all planning on drinking 16-17 beers….. If you keep your beer on tap refrigerated with CO2, it will generally last about 2-4 months depending on the beer.

How Much Are Kegerators?

If you don’t already have a kegerator, you may want to look into purchasing one. However, they are not cheap. Another option is to build your own, and maybe you already have a mini fridge or chest freezer. Building your own kegerator or keezer isn’t any cheaper than buying one, but it can be a fun process. Check out our 5 Best Kegerators Reviewed article to find out which is best for you.

There’s a keg size for everything. The best keg is going to depend on what you’re looking for. For example, if you’re throwing a party, a full half-barrel keg is likely the best option. It’s the cheapest option on a per beer basis and holds 165 12 oz beers. However, half barrel kegs can’t always fit into kegerators. Furthermore, if you have more than one tap, you’re likely not able to fit more than one half barrel if at all. So, you’re best option is a quarter barrel or sixth barrel.

The downside to quarter barrels and sixth barrels is that they are more expensive. You’re often able to buy just as much beer by the bottle for the same price or cheaper. The benefit to the keg is having beer on tap, and not having 80 beers in your fridge.

Then there’s the Cornelius keg. This is primarily for the homebrewers out there. Bottling and capping each individual beer isn’t the most fun process, and who doesn’t want to have their homebrew on tap? If you have a kegerator and homebrew, get a Cornelius keg and enjoy your beer out of your favorite glass.

Lastly, the mini keg only holds 14 beers and is best to limit trash and for fun. Crack open a seasonal mini keg for the holidays, or take one camping with your buddies.