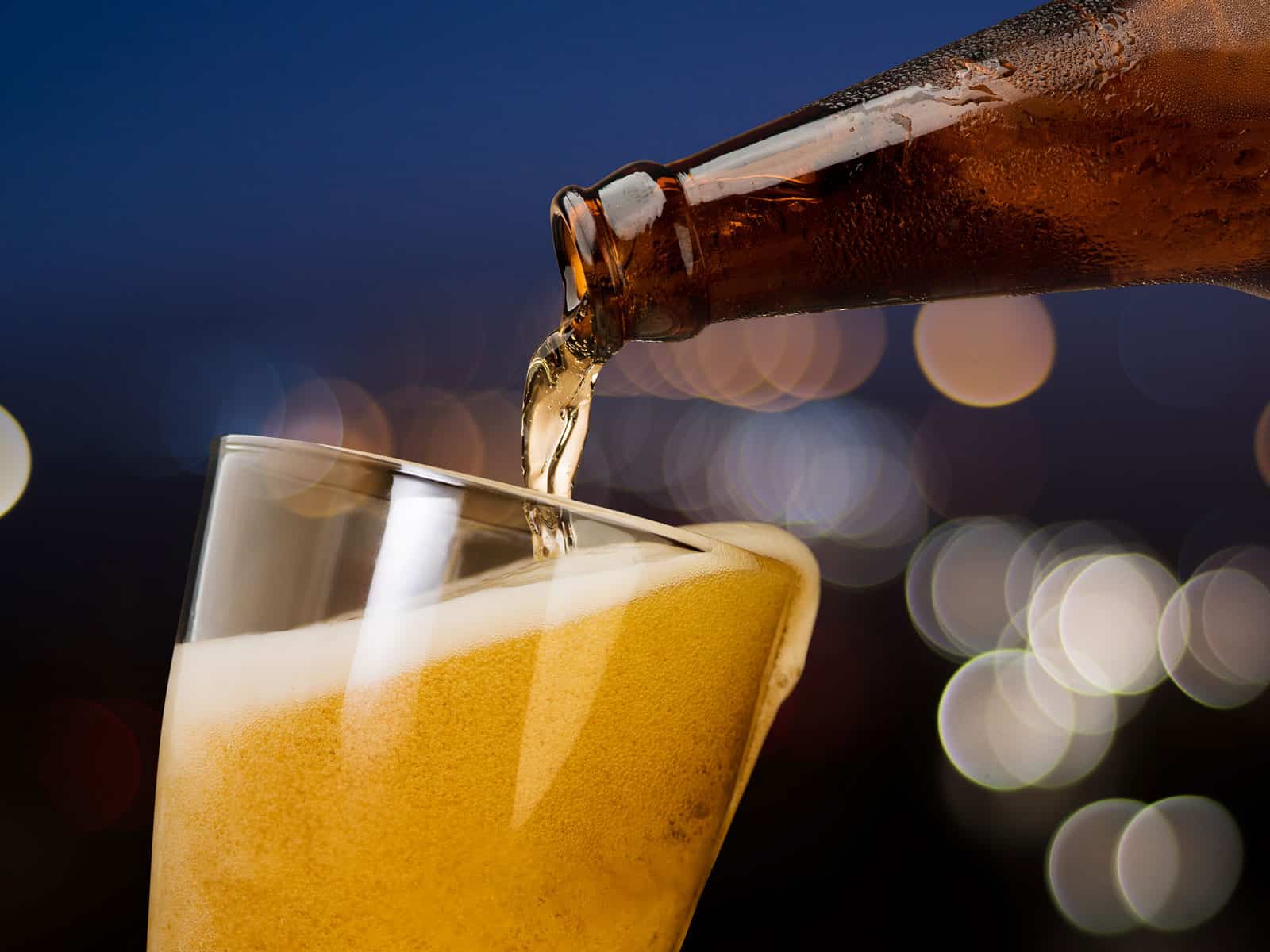 Putting salt in beer likely a foreign, or even ludicrous, idea to many of you. However, people have been salting their beers for centuries, it’s just not as common a practice as it once was. The primary reason the practice has died off is because beer is a lot better today than it was centuries ago. Adding salt for flavor isn’t as necessary because there are so many varieties of beer that are full of flavor, but it wasn’t always like that. This doesn’t mean there aren’t reasons to put salt in your beer, though.

Putting salt in beer can enhance the taste of beer, keep you hydrated, limit your trips to the bathroom, and solve issues of gas and bloating. Does this mean you should definitely put salt in all your beers? Probably not, but let’s take a deeper look at salting your beer.

The earliest records of salted beers are Gose beers which originated in 13th century Goslar, Germany. These beers either have salt added to them, or use a water source that has salt in it. Even today, there are beers brewed with salt in them. New Belgium and Monkey Paw are just two examples of breweries releasing salted, non-gose style beers. However, that’s not the main focus of our article today. It’s about YOU adding salt to your beer, not beers brewed with salt.

As we mentioned, adding salt to beer was a much more common practice centuries ago. That’s one reason for people still doing it today – old habits die hard. And this habit of putting salt in beer could’ve been passed down for generations. There are many more reasons to put salt in your beer than tradition or habit. Let’s look at one of the main reasons: adding flavor.

Adding flavor is one of the best reasons for you to add a pinch of salt to your beer. Before I get too ahead of myself, let me explain one thing. I am not saying you should put a pinch of salt in every beer you drink. For example, Voodoo Ranger is a group of IPA’s that I love. I wouldn’t ever put salt in an already delicious beer. But what if your beer isn’t so good? Salt is a great way to make a bad beer not so bad, or an average beer better.

Let’s say you visit a new brewery or bar, and try a beer you’ve never had. As it turns out, this new beer isn’t very tasteful. Add a pinch of salt to make your beer taste better, and then try a different beer. Similarly, you can use salt with very light, neutral beers. I have a 3-tap keezer, and Michelob Ultra occupies one of those taps. If I’m looking to have a light beer instead of a normal IPA that’s on tap, I’ll add a little salt to my glass and pour an Ultra. Simply put, adding salt to a beer is a good way to add flavor or neutralize any bad flavors. It’s certainly not necessary if you enjoy the beer you are drinking.

Whether it was your days in college of binge drinking light beer, or nights out drinking a couple heavy beers, you’ve likely experienced gas and bloating from beer. Well, one benefit of adding salt to beer is reducing the amount of gas you consume. Most beers are carbonated with carbon dioxide. One way CO2 is released is through foam. Salt reacts with the beer and creates a more full head which, in turn, releases more CO2. Less CO2 in your beer, means less CO2 in your stomach.

If you don’t like getting bloated and feeling like a stuffed pig after a couple beers, salt is a good way to counteract that. Furthermore, it may save you from an embarrassing amount of gas later in the night. There is a trade off, though. Releasing more CO2 can make your beer more flat than you’d like. Personally, I find it to be a miniscule difference.

Retaining water and staying hydrated is the most beneficial effect of salt from a health standpoint. When you sweat, you lose a lot of water (and a bit of sodium too). The first thing you’re supposed to do after losing a lot of water is to replenish the water by hydrating. However, if you have low amounts of sodium in your body, you won’t retain much water. Instead, you’ll be making frequent trips to the bathroom to rid yourself of excess water.

The same goes for beer. A pinch of salt in your beer is going to help you retain as much water as possible. Not only is this a healthy option, but it may also reduce your hangover. Dehydration is, in fact, one of the main reasons we experience hangovers. There is one more benefit of retaining more water.

Fewer Trips to the Bathroom

With more salt in your body, the more water you can hold. So, instead of making a bathroom trip every hour, add a little salt to your beer. It’ll keep you from making those frequent trips to men’s or women’s room. If you decide to mix a water in throughout the night, it’ll be much more beneficial to your hydration instead of getting peed out shortly after.

You Can Drink More Beer

If drinking beer with salt means you’ll be more hydrated and less bloated, that means you can drink more of it, right? I mean, if your goal is to drink a lot of beer, adding salt may be just the thing you need. Whether you’re having a cookout, beach day, golfing or whatever it is, you may be throwing back a couple more brews than usual. Adding a pinch of salt is going to make beers 5 and 6 a lot easier to put down.

However, this may not be completely true. Some say that adding salt to beer will get you drunk quicker. Whether that is a good thing or bad thing, it’ll likely inhibit your ability to drink as much. Let’s take a look to see if salt really does make you more drunk.

Does Salt in Beer Make you Drunk Quicker?

No. There is no evidence to suggest that putting salt in your beer will make you drunk quicker. The reason people speculate that it does is that large amounts of salt can widen the bottom of your stomach. This means that alcohol would hit your system quicker. However, there isn’t much information out there to confirm just how much salt it would take. At the end of the day, salt definitely does not make you more drunk. IF salt makes you absorb alcohol quicker, it would only make you feel the effects sooner.

Downsides of Adding Salt to Beer

Changing the Flavor of Your Beer

Salt is used to enhance the flavor of some beers and add flavor to flavorless beers. However, what if you’re drinking a really good and flavorful beer? Salt can actually have the opposite effect. It can overpower the flavors you like. It can reduce some needed bitterness.

That’s why we don’t think you should add salt to your favorite beers on the basis of flavor. You’re welcome to add salt to good beers for the other benefits, but know it may have a negative effect on flavor.

It seems counterintuitive that adding salt to beer can be a benefit for hydration reasons and a detriment for reasons of dehydration. Well, it all depends on whether or not you drink any water. Salt retains water and, simultaneously, tends to make you more thirsty. If you continuously drink more and more beer to quench your thirst, you can become dehydrated as there is way more salt than water in your body.

However, if you mix in a water or two throughout the night, you’re body will retain that water much better if you have some sodium laying around. Whether or not you put salt in your beer, having a water for every 3 or so beers is a good idea. If you put salt in your beer, a water will be more beneficial. At the same time, not having a water can be more detrimental if you are salting your beer.

Sodium is known to have negative health effects. Too much sodium in your diet can lead to hypertension and eventually heart disease and stroke. Adding a pinch of salt to your beer isn’t going to send you to the hospital, but if you add salt to every beer you drink, along with eating salty foods, you may increase your risk of heart problems down the road. This article from Harvard documents some of the risks of sodium intake.

Putting Salt in Your Beer: Summary

Like most things in life, there are benefits and disadvantages of adding salt to your beer. It’s our job, as individuals, to determine whether the benefits outweigh the drawbacks. In my opinion, adding salt to beer is a great idea in certain scenarios.

If you are drinking your favorite beers all day or night, you really don’t need salt. As I mentioned, you can still salt good beers, just don’t do it expecting enhanced flavors as it may have the opposite effect. From a taste standpoint, salt is best added to neutral tasting beers. Or, if you find yourself with a less than pleasant tasting beer in your hand, salt will help you finish it.

Outside of just taste, salt has many benefits. Not being bloated and using the restroom less frequently are two of my favorites. I love beer, but too often I switch over to liquor due to a bloating stomach. Adding salt has noticeably reduced bloating for me.

Second, having to use the restroom every hour can be frustrating. A crowded bar or club may have a line, or you’re constantly leaving conversations and friends to head to the restroom. Most of us are familiar with the saying, “I opened the flood gates too early” or some expression like that. It’s in reference to peeing too early in the night because after you pee once, it seems to hit you more frequently. Adding some salt to your beer can help you avoid any problems with the ‘flood gates’.

Below are frequently asked questions about putting salt in beer. Many of these are answered in the article above.

Why Do People Put Salt in Beer?

There are many reasons to add a pinch of salt to beer. The most common is to enhance the flavor. Whether you are drinking a neutral beer, or just a bad one, salt can make your beer taste better. other reasons include hydration, reduced bloating, and fewer bathroom trips.

Does Adding Salt to Beer Make You More Drunk?

No. Adding salt to beer does not make you more drunk. If anything, it would only make you feel the effects of alcohol quicker. However, there is no actual data to support this theory.

What Salt Do You Put in Beer?

You can just use regular old salt to put in your beer. The other option is beer salt. Beer salt is typically more coarse than regular table salt and often has additional flavors such as lemon or lime.