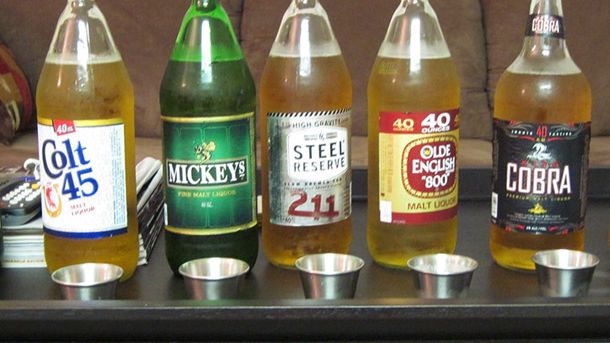 I assume we all know what beer is here, but what exactly is malt liquor and how does it differ from beer? While malt liquor may sound like it could be whiskey made with malted barley, it is in fact a type of beer. If you don’t know what malt liquor is, you still may have had some or at least seen some. It is often referred to as a “forty” since they are typically sold in 40 oz bottles.

In this malt liquor vs beer comparison guide, we’re going to discuss the similarities and differences between the two. So, if you’re curious about forties and malt liquor, just keep on reading.

Beer is one of the oldest drinks in human history. In fact, it dates all the way back to 5000 BC when humans discovered beer and bread through barley and fermentation. Chemical tests also show beer was stored in jars roughly 7,000 years ago.

Fast forward to today, it’s hard to imagine that a multi-hundred billion dollar business started out from domesticating cereal grains and some wild yeast strains. The shift towards beer as a business began in the 1200’s when hops were added to beer and exported to various countries and territories. As the world became more industrialized, so too did beer.

Now we have everything from brewpubs to craft breweries to large billion dollar corporations brewing beer. While we can break beers down into lager vs ale, there are also too many different variations of beer to count. That just goes to show how much the world of brewing has grown over the years.

The term malt liquor was first mentioned in England in 1690 but not in North America until 1842. It was actually the Canadians who used the term malt liquor in reference to ale, beer, and porters. Modern day, you may be more familiar with the brands or slang terms for malt liquor. Colt 45, Magnum, Steel Reserve, and King Cobra are all popular malt liquors sold today. If you are a fan of singer and rapper Afroman, you may be familiar of the lyric “Colt 45 and two zig zags, baby that’s all we need”. He is indeed referencing the popular malt liquor.

What is Beer vs Malt Liquor?

We’ve covered some of the history of beer and malt liquor, but we have not answered all your questions just yet. You may have a better understanding of beer vs malt liquor, but what exactly are the two? Let’s start with beer.

Beer is fairly simple and only includes 4 main ingredients. Water, yeast, hops, and a source of starch. While different yeasts can be used in brewing beer, the two main types of yeast are going to differentiate whether the beer is a lager or ale. (You can read more about yeast HERE). Our source of starch is primarily malted barley, but corn, rice, wheat, and other grains are commonly used. Lastly, we have hops which add flavoring. While the brewing process can cause a lot of variation in flavor, hops is the main ingredient and way to flavor beer.

However, beer does not have to use hops. As you may remember from the history of beer, hops weren’t added to beer until the 1200’s. So, what happens if you don’t use hops in beer? Well, we can discuss that next.

What is Malt Liquor?

Malt Liquor, or a forty, is, in fact, a type of beer. Legally speaking, malt liquor is any beverage that is made through fermentation of any concoction of barley, malt, hops, or anything similar. In addition, the beverage must be more than 3 and 1/5 alcohol by weight which translates to roughly 5% ABV. So, most beers are considered malt liquors from a legal perspective. However, we are not as concerned with the legal definition as we are with providing you with information about how these terms are used.

Most beers come in, on average, in the 4-6% range. Since the craft beer explosion in the 2000’s, there are plenty of stronger beer options, though. That still doesn’t stop the notion that malt liquor is decidedly stronger than beer. Colt 45 lays on the lower end of the spectrum at 5.6% ABV with many around the 8-12% range, and plenty going up to 20% ABV. Malt liquor achieves this by adding sugars to the barley. Sugar is food for yeast, and ethanol or alcohol is the byproduct of yeast. So, the more sugar for the yeast to feed on, the higher the alcohol content.

The last thing to note is hops. While pretty much all beers and malt liquors use hops nowadays, it wasn’t uncommon for malt liquor to forgo the use of them. While not using hops can take away from the overall flavor, it also results in a less bitter taste. Many blogs will claim that malt liquors do not use hops, but they do. Malt liquor typically does not get as creative and artistic as craft beers with hops, nor do they use as much.

As we mentioned, we are less concerned with the legal definition of malt liquor as we are with modern connotations of it. For one, malt liquor has become heavily associated with the drink of choice for poor, inner-city communities. One reason for this is because the price tag of malt liquor and especially forties. For just a couple dollars, you can get 40 oz of beer with a higher alcohol content. So, if you’re looking at getting drunk on a budget, a forty is the way to go.

Malt liquor has been scrutinized for marketing towards the poor. For one, poor or homeless men are much more affected by addiction and alcohol usage problems. So, these companies have taken heat for making millions off of those who struggle from a financial and addiction standpoint. These companies have responded by arguing that they are only marketing to those who already purchase their beverages.

Why is malt liquor so cheap, though? Well, the primary reason is back to the hops. Hops are an expensive part of brewing, and since malt liquors don’t use many hops or don’t use them at all, they can be produced much cheaper. It’s also a reason many college kids end up drinking forties often. The ability to get drunk on a budget is something perfected by many college students, and one way they do this is by sidewalk slammers.

What is a Sidewalk Slammer?

A sidewalk slammer is a mixture of a Four Loko and a forty. In essence, you drink about half of the 40, 24 oz to be exact. Then, you add a 24oz Four Loko to the bottle. A forty contains about 8% alcohol by volume and a Four Loko contains 12-14% ABV. As you can imagine, 64 oz of liquid containing about 10% ABV, on average when you combine the two, is a lot of alcohol. If you are to take those numbers, it would be 6.4 oz of alcohol which is more than 10 standard shots.

The final stage of a sidewalk slammer involves finishing the drink and slamming the bottle on the sidewalk. As we mentioned, drinking a sidewalk slammer can be a danger in of itself. But we would be lying if we said we didn’t have one or two during our college days. However, if you want to pay no heed to our warnings and drink one yourself, please pass up on the last part. There is no need, however cool you may think it is, to break a 40 oz glass bottle on the sidewalk. It is both dangerous to yourself and everyone in the surrounding area, including pets.

Like we said, sidewalk slammers are popular for the same reason as Four Lokos and malt liquor. You can get buzzed efficiently. As my uncle says, it’s all about buzz units per dollar. Large amounts of liquid with high ABV is the recipe to maximize buzz units per dollar. Just be careful if you decide to indulge.

Malt liquor is, in essence, a type of beer. We can talk about the legal definitions of beer and malt liquor, but that isn’t reflective of common usage of the terms. If someone asks you to pick them up malt liquor, they are really looking for a higher ABV, 40 oz bottle of beer. Colt 45, Steel reserve, King Cobra, and Colt 45 are all popular examples.

Malt Liquor is heavily associated with poor or even homeless communities for its cheap availability. Partner that with it’s high ABV and its also a drink that is efficient. For a cheap price, you can get a lot of malt liquor that will get you buzzed. Mix in a little Four Loko and you have a popular college pre-game drink, a sidewalk slammer.

At the end of the day, a forty and malt liquor have become synonymous. It has, on average, a higher alcohol content than beer and either doesn’t use hops or doesn’t rely on hops as much as beer.