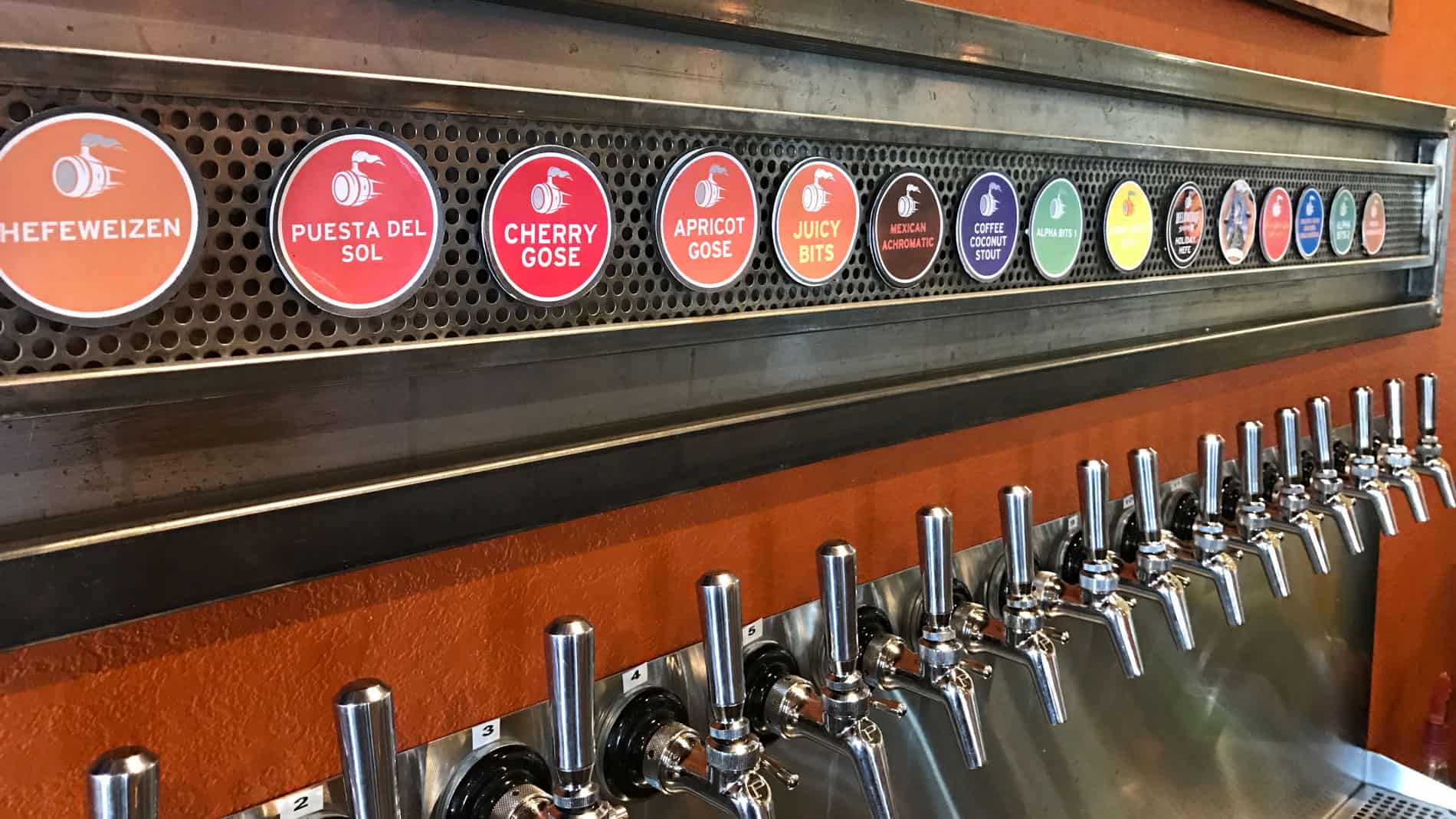 In the last century, the world of beer, and brewing, has grown exponentially. This has allowed a few large companies such as Anheuser-Busch to control much of the mainstream flow of beer. But it’s also allowed a lot of smaller brands to find a market as well. This is why we have domestic beer, craft breweries, and microbreweries, and even nanobreweries.

Traditionally speaking, there were breweries, pubs, and restaurants. However, with the growth of beer and restaurants, these have all seemed to merge. Breweries now serve their own food and restaurants brew their own beer. This has given rise to brewpubs and gastrobreweries.

With all of this growth, new terminologies have popped up all over this place. So, we are going to help you out. In this article, we are going to cover exactly what it means to be a craft brewery and microbrewery, along with the differences between a brewpub and gastrobrewery.

What Is A Craft Brewery?

A Craft Brewery is a small, independent brewery. This means that less than 25% of the company is controlled by an “alcohol industry member that is not itself a craft brewer”, according to the Brewers Association. A small brewery is one that produces less than 6 million barrels of beer a year. So, if a brewery begins to produce more than 6 million barrels, or if a company such as Anheuser-Busch or Molson Coors purchases the brewery, then it’s no longer considered a craft brewery.

For example, New Belgium, who brews Fat Tire and Voodoo Ranger, recently sold to one of the largest Japanese brewing companies. Prior to the sale in 2019, New Belgium was the 4th largest craft brewery, but now are no longer considered craft. Read about the Top 5 Japanese Beers HERE!

Some of the most notable examples of craft breweries include:

In fact, over 75% of adults living within the US live within 10 miles of a craft brewery. So, if you think of the breweries close to you, or the ones you frequent, it is likely to be a craft brewery.

Craft Beer is any beer that is produced by a craft brewery. However, we can make generalizations about craft beer. The goal behind craft beer is quality. Bud Light, Coors, Miller, and so on, are all mass produced. It’s brewed to be as profitable as possible and uses traditional ingredients. Craft Beer is more expensive because they use different ingredients, in addition to traditional barley. Their goal isn’t to produce as much beer as possible, but a variety of quality beers that are more unique.

What Is A Microbrewery?

When you visit a craft brewery, there are likely plenty of seats, people all around, food trucks on site, etc. Microbreweries typically don’t have all of that because they can’t sell too much beer on-site. Generally speaking, their facility will be primarily focused on brewing with a section for tasting.

Since microbreweries are small, less than 6 million barrels, and independent, they are also, technically speaking, craft breweries.

*If you are interested in trying more beers from microbreweries, or craft beers, sign up to have shipments delivered to your door at MonthlyClubs.com.

As I mentioned, there are even nanobreweries now. There is no governing agency or statement as to what determines a nanobrewery, but there is a general idea. Much smaller than microbreweries, a nanobrewery is run by just a couple of brewers, say one or two. Another way to classify a nanobrewery is by their production. If a brewery is producing 3 or less barrels per batch, it can be described as a nanobrewery.

Macrobreweries, like Anheuser-Busch and Molson Coors, mass produce beers. They are often lighter, and a little more bland or traditional. Craft beers are just like their name, a craft. There’s a little more art and experimentation to it. They use non-traditional ingredients and methods to brew distinct beers. Now, this is generally speaking, as a craft beer can still be lighter and less distinct.

So, we’ve covered some of the basics of breweries, but what happens when you throw food into the mix? Well, it becomes more than just a brewery. Many breweries have food trucks parked around the premises, especially since COVID required breweries to offer food to stay open. However, this is different than what brewpubs and gastrobreweries offer.

What’s a brewpub? A gastrobrewery? What are the differences between the two? These are the questions we are going to answer in the following sections.

What Is A Brewpub?

A brewpub is a combination of a brewery and a pub. The beer that is brewed on-site is also served on-site. To be considered a brewpub, more than 25% of it’s beer has to be sold on site. That’s the reason brewpubs typically offer more food options. Their goal is to drive consumers into their building to sell beer.

We can see a contrast here between brewpubs and microbreweries. Microbreweries primarily sell their beer to be distributed. Brewpubs want to sell as much beer as possible to people in their bar. In essence, brewpubs operate more so as a bar and service, than microbreweries and craft breweries.

What Is A Gastrobrewery and Gastropub?

Gastro is Greek for stomach. So, if a brewpub is a mixture of a bar and brewery, a gastrobrewery is a brewery and restaurant. Now, the difference between a brewpub and gastrobrewery is small. A gastrobrewery focuses on serving high-quality food with high quality beer that is brewed on-site. For example, think of BJ’s Brewhouse. They have significant dining services and brew their own beer.

A gastropub, then, is just a blend of a restaurant and bar. The distinction between a gastrobrewery and gastropub is whether or not they brew their own beer. At the end of the day, both gastropubs and gastrobreweries are driving people into their breweries or bars for their food services.

Brewpubs and gastrobreweries have the same goal. Drive consumers to their brewery. They just do it in two different ways. Brewpubs use the appeal of a bar in order to fill their brewery. They often have a unique visual appeal. They tend to have some of their brewing tanks and equipment exposed, and offer a different experience than your typical bar.

A gastrobrewery, on the other hand, appeals to those looking for a dining experience. You can sit down and have a nice meal with family and friends, and enjoy a craft beer. The focus on food and sit-down dining is how gastrobreweries sell most of their beer.

While both brewpubs and gastrobreweries offer food services, it is not a focus for brewpubs. At a brewpub, you are likely ordering chicken tenders, a chicken sandwich, or burger of some sort from a cook in the back. At a gastrobrewery, you are being waited on and have many more high-quality options to choose from.

Craft Brewery vs Microbrewery vs Brewpub vs Gastrobrewery Summary

Let’s start at the top. The very top. Macrobreweries produce more than 6 million barrels of beer a year. After that, we have craft breweries. They produce less than 6 million barrels a year, and less than 25% of their company is owned by a macrobrewery. After this, things can get more complicated. That’s because microbreweries, brewpubs, and gastrobreweries are, often times, also craft breweries, though not always.

A microbrewery produces less than 15,000 barrels of beer a year. More than 75% of their beer has to be sold off-site, so they typically don’t offer too many on-site services. It’s not uncommon for them to have a tasting room or some smaller area where you can purchase their beer.

Brewpubs can be a microbrewery, craft brewery, or both. The main idea behind a brewpub is serving beer on-site. They offer food services, maybe even sit-down dining services, and sell their beer that they brew in the back. In short, a brewpub is a mixture or a brewery and a bar.

Below is our FAQ section. Many of these questions are covered in the article above.

How Do I Know If a Beer Is from A Micro or Craft Brewery?

The only way to truly know is to do research or ask the brewery themselves. Ultimately, many microbreweries will market their beers as craft beers. That’s because “craft” has become some kind of stamp of quality over the last decade or two.

What’s the Difference between a Brewpub and a Bar?

A bar sells food and beer just like a brewpub. The difference is that a brewpub also operates as a brewery. They brew their own beers, and you can typically see their equipment while in their brewpub.

What’s the Difference between a Gastrobrewery and Restaurant?

There are also gastropubs. They are simply quality restaurants that also place importance on the service and availability of craft beer. However, unlike gastrobreweries, they do not brew their own beer.

What Is Craft Beer?

Craft beer can be brewed by microbreweries, brewpubs, gastrobreweries, nanobreweries – really anyone but a macrobrewery. Craft beer generally uses a lot of experimentation. Trial and error with different ingredients and brewing techniques with the intent to make a unique and distinct beer is the general idea behind craft beer. The numerous craft IPA’s out their with so many different styles and flavors are proof of this.