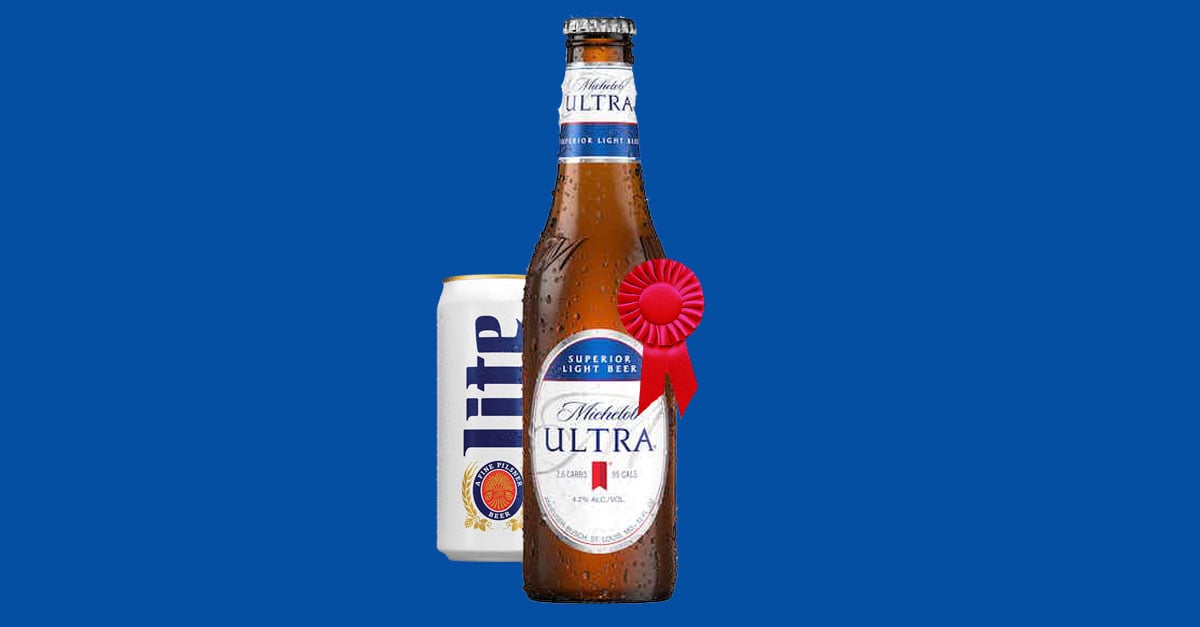 Recently, we’ve been comparing light, domestic beers to bring to you the similarities and differences between the two. While these beers get knocked for lacking taste, flavor, and being water-like, 99% of us still have some opinion about which is best and which is worst. In this Miller Lite vs Michelob Ultra comparison guide, we have the 3rd most popular beer in the US facing off against the 5th most popular beer.

We’re going to cover the histories, taste, nutrition, and rivalry between these two beers. So, if you’re wondering their differences or which is better, keep on reading.

We’re going to discuss some of the history of Miller Lite and Michelob Ultra to understand how they got to where they are. These two beers are owned by two of the largest beer and alcohol conglomerates in the world, so let’s take a deeper dive.

Miller Lite is the third most popular beer in the US. Much of this is due to the corporation behind them. Miller Lite was originally introduced to the US in 1975 by Miller Brewing Co. It was and still is marketed as the original light beer. That’s because the recipe was first developed in 1967 under the name Gablinger’s Diet Beer. After some struggles, the beer passed through multiple hands until it got to Miller.

Miller had the money to market their “Lite Beer from Miller” in ways that the other brewing companies didn’t. They used professional athletes to appear as a masculine beer and appeal to men. This effort had instant success and in 1977 Miller Lite was the second most popular beer. This prompted other brewers and companies to follow suit with the likes of Anheuser-Busch releasing Bud Light in 1982.

Michelob Ultra was introduced in 2002, but its roots go back to 1896. It began as a pale lager with 4.7% ABV and was produced for the wealthy. However, it saw early struggles throughout the 1900’s. There were two world wars and prohibition that kept Michelob from ever really seeing much success. Current day, Michelob Ultra is the 5th most popular beer in the US, just 20 years after its release.

Like Miller Lite, much of its success has come from the company behind Michelob, Anheuser-Busch InBev. They are the largest beer conglomerate in the world, owning over 500 beverage brands.

One of the main reasons for the explosion of light beer at the end of the 20th century is health reasons. Light beers have less calories and carbs than others, but, subsequently, they typically have less alcohol too. Lets take a look at how Miller Lite stacks up against Michelob Ultra when it comes to nutrition.

As you can see, Miller and Michelob are very similar in terms of nutrition. Michelob Ultra has 95 calories and 2.6g of carbs which is just 1 calorie less than Miller Lite and .6g carbs less. Furthermore, they have the same alcohol percentage, so Michelob is only a hair healthier than Miller Lite. These very slight differences will show up again when we discuss their rivalry.

It’s funny how we often talk about light beers. We say things like “it tastes like water”, “there’s no flavor”, “they all taste the same”. However, there must be some difference in taste because many of us have differing opinions about which light beers are best and worst. For example, Coors Light is my least favorite and I prefer Bud Light. My brother lives and dies by Coors and absolutely despises Bud Light. So, what exactly is the difference in taste between Miller Lite and Michelob Ultra?

Well, it’s difficult to say. For one, the difference is minuscule and a lot of it comes down to personal taste. So, I’ll speak personally. To me, Michelob has a slightly more citrus flavor and Miller Lite is more earthy. I, for one, prefer Michelob Ultra to Miller Lite, but you should try both to figure out which you prefer.

From a price standpoint, the two are very similar. Michelob may be a dollar or 2 more expensive than Miller Lite when it comes to buying a 24 pack. However, many of these differences can come down to location and individual store.

If you watch a lot of TV, especially football and the Super Bowl, you may notice that these two brands have a little rivalry going on. This rivalry really comes down to Miller Lite taking shots at Michelob in their commercials and advertising.

Michelob has been portraying themselves as the healthy or fitness beer for quite some time. They’ve used athletes such as Lance Armstrong, Peyton Manning, Jimmy Butler, and countless others in their marketing. Miller Lite decided to go on the offensive and attack Michelob from a taste view point.

In one commercial, a man places a case of Michelob on the counter and the cashier says “you know Miller Lite only has one more calorie”. A parrot then chirps “and more taste”. Michelob is often thought of to be the healthiest light beer, so Miller is implying that the better taste of Miller is worth the measly one calorie.

The most notable commercial may be Miller Lite’s Super Bowl ad. In the commercial they said if you type in this URL (it went on to be a very long URL), we will give you free Miller Lite. The long URL you had to type in was meant to burn one calorie. Once again, they take a dig at Michelob by implying the taste is more important than the one calorie.

As I mentioned in our Natural Light vs Busch Light guide, these light beers all occupy the same space. They are cheap, light, easy to drink, and lack distinct flavor. This is so they can appeal to as many people as possible, and mass produce beer at a cheap price. The way these beers stand out then is through marketing campaigns. Michelob Ultra positioned themselves as the healthiest light beer option, and Miller Lite took a shot by saying their beer tastes so much better that the one calorie doesn’t matter.

Many beer lovers knock light beer because its made for the masses, they aren’t distinct flavorful beers. However, we still have very strong opinions about which light beers are worth drinking and which aren’t. Furthermore, the rivalries and marketing campaigns are fun. Natty Light, Busch Light, Miller Lite, Michelob Ultra, Coors Light, etc., all these beers have unique features and cultures that we immediately think of.

When it comes to differentiating between which of these beers are better or best, it all comes down to personal preference. Here at 53 Brews, we prefer Michelob Ultra to Miller Lite. Try both to figure out which you like more!

Below are frequently asked questions regarding Miller Lite vs Michelob Ultra. many of these questions are answered in the article above.

Which Has More Carbs, Miller Lite or Michelob Ultra?

Which Has More Calories, Miller Lite or Michelob Ultra?

Miller Lite and Michelob Ultra have the same ABV. Both clock in at 4.2% alcohol by volume.