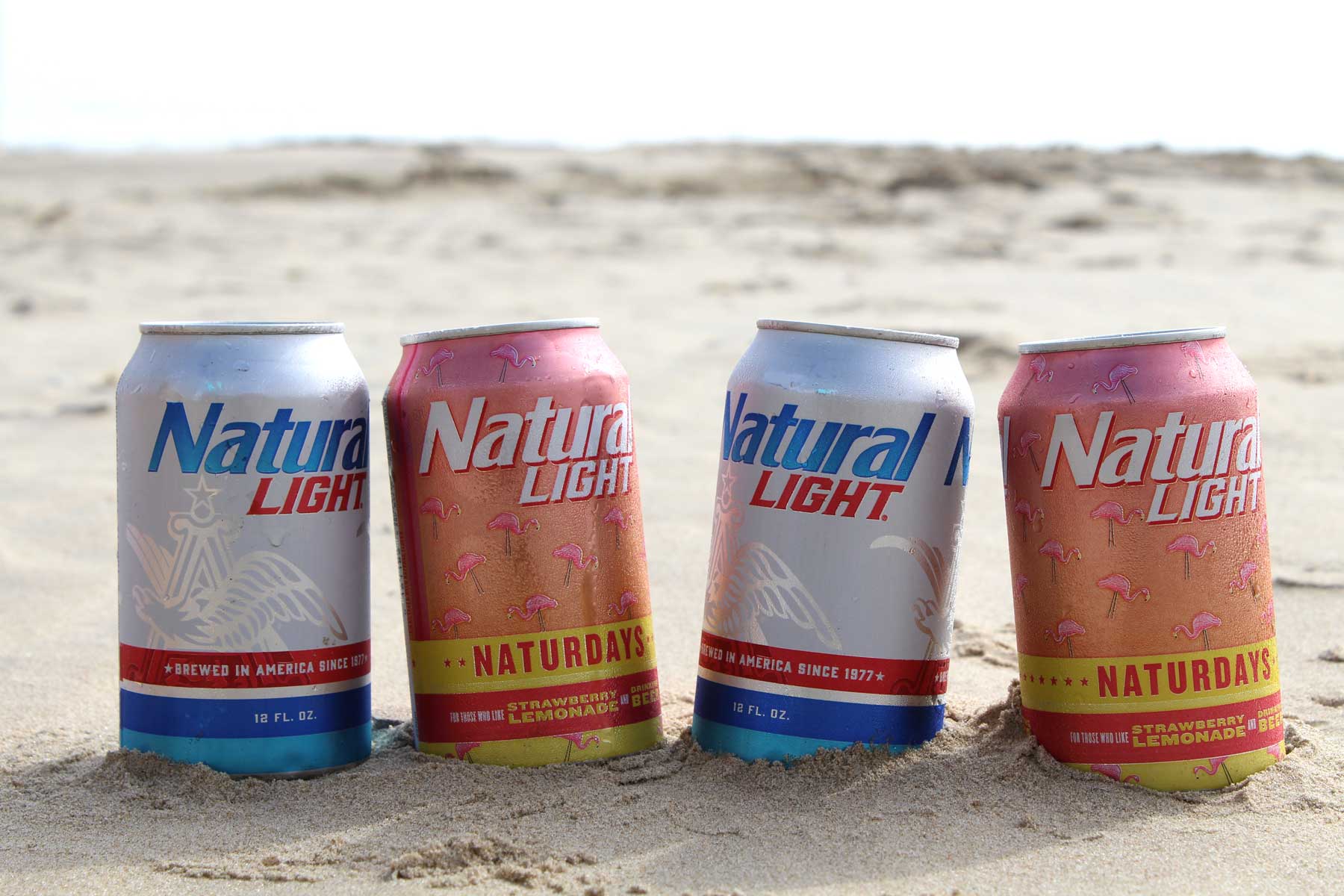 Should you buy Natty Light or Busch Light? We’re going to cover their histories, nutritional info, brewing process, taste, price, and more to help you decide which is better for you.

Before we get into the more pertinent information, let’s discuss some of the history of these two light beers. It’ll help give us an understanding as to how they got to where they are now.

Natural Light was introduced in 1977 as Anheuser Busch’s first low calorie, light beer. The light beer scene blew up in the 80’s and 90’s, so Natural Light had cemented its place among the top. Then, in 1995 Natural Light came out with Natural Ice, a higher ABV light beer. We actually rate this beer among the best when it comes to High ABV Light Beers. In 2008, Natty Light went on to take bronze at the World Beer Cup for light, American lagers.

One cool note is that Natural Light was actually launched into orbit in 2011 making it the first beer in outer space. Currently, Natural Light is the 8th best selling beer in America.

Adolphus Busch falls in love with the daughter of a local business man, and they marry in 1861. Her name, you ask…. Lilly Anheuser. By 1879, Eberhard Anheuser had renamed his company Anheuser-Busch. In 1880, Adolphus Busch takes over the company following Eberhard’s death. However, Busch, the beer, wasn’t created until much later.

Originally named Busch Bavarian Beer, Busch was the first beer introduced at Anheuser-Busch following prohibition. It wasn’t until 1989 that Busch Light was introduced, making it just a little late to the scene of light beer. Today, Busch Light falls right behind Natty Light at #9 for best selling beers in the US.

The biggest reason for the explosion of light beer is nutrition. Many of us like to have a couple beers after a long day. Many of us like to, or at least used to like, binge drink beer. What we don’t like are the calories that can quickly stack up. So, lets take a look at Natural Light vs Busch Light to see which will save you the most calories.

These numbers come direct from each beer’s website and are per 12oz.

We had warned you that Natty Light and Busch Light are quite similar. They are owned by the same company and have almost identical nutritional information. The only difference is that Natural Light is just barely stronger than Busch Light. A Natty clocks in at 4.2% ABV compared to the 4.1% of Busch Light.

The goal of these mass-produced, light American lagers is to appeal to as many people as possible. The first way they do that is by reducing the calories. Next, it’s taste and price. There are a lot of people in the world that don’t like beer. Crazy, I know. You can give them an IPA, a porter or stout, or a Belgian ale. It doesn’t matter, they simply don’t like flavorful, awesome beers. In comes light beer. They generally have little flavor and are served ice cold so as to be refreshing. This way everyone can enjoy an ice cold beer.

When it comes to buying cheap beer, there really isn’t a better option than Busch Light or Natty Light. Sure, you can go for malt liquor in the form of a forty, but a 30-rack of each of these beers is right around $20. If you plan on drinking a lot of beer, buying Natural Light or Busch Light is a cost effective way to do so.

One of the biggest differences between Natty Light and Busch Light is culturally. Let me start by saying that anyone can drink any beer at any given time, but these two beers have a specific target market.

This section is all about Natty Light, not Natural Light. Yes I know, they are the same thing, but no one calls it Natural Light in the wild. Natty Light is the official beer of college students around the world. Whether it’s beer pong, flip cup, king’s cup, or any other drinking game, Natty Light is a staple. Natty is cheap, light, and easy to chug making it the perfect beer for wild parties.

Natural Light, the brand, has embraced their young target market. First, they have what’s called ‘Naturdays’. It’s a flavored beer that comes in strawberry lemonade and pineapple lemonade. If that doesn’t say “Please, underage college kids, come drink our fruity beer that’s not really beer” then I don’t know what does. They have even released a Natural Vodka that comes in a bunch of fruity flavors. I’m not knocking Natural Light for this either. They know their target market, and they know how to appeal to them. Lastly, I also drank a lot of Nattys in my day.

If drinking fruity vodka is more your speed, go read about the best chasers for vodka shots.

If I’m drinkin’ a Busch, you can bet I’m partaking in some kind of country activity. Hunting, fishing, boating…? Busch. There’s a very specific reason we associate Busch, and Busch Light, with these activities. First, let’s look at their cans. They have a variety of cans, but they all feature some outdoors image. Whether it’s a mountain, a stream, forest, lake, or their iconic camo cans, they appeal to that lifestyle.

Furthermore, they run different campaigns all aligned with these activities. They are partnered with Ducks Unlimited to preserve wetlands, the National Forest Foundation to preserve forests, and they advertise themselves on peoples barns, not billboards.

At the end of the day, these beers have a culture associated with them because of marketing. As long as college kids buy Natty and drink fruity beers Natural Light is going market their products to them. The same goes for Busch Light. You can hate them for it or you can love them for it, but there is a reason they do it. These light beers can’t stand on taste and flavor. They are all light, easy to drink, and cheap. So, how do they stand out? By appealing to a certain lifestyle or a certain group. It’s just smart business.

These two beers are extremely similar. I mean, that’s why we chose to write a Natural Light vs Busch Light guide. They are owned by the same company, have nearly identical nutritional info, and taste similar. The real difference comes from their audience. If you walk around a college campus on a spring Saturday, you will find 50x more Natural Light than Busch Light. Wander in a forest until you stumble upon a deer blind, I bet they’ve got camo Busch Light and not natty.

The reason these differences exist has nothing to do with taste and price. It’s simply a marketing strategy. That’s to be expected with beers like this because it’s a business! Craft Beer is more expensive because they experiment, brew by hand, use a lot of hops. These domestic beers are mass produced and are meant to be as cheap as possible.