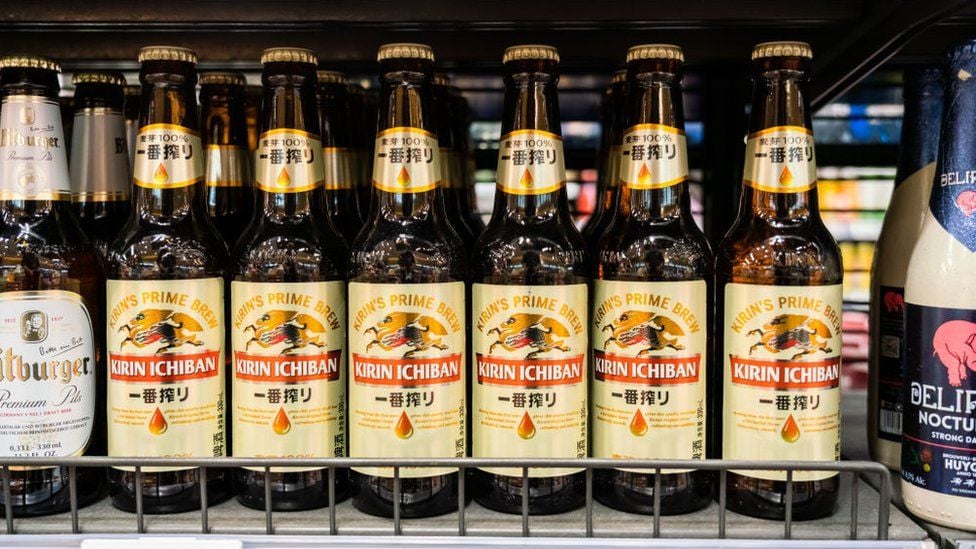 Kirin Ichiban vs Sapporo is not only a showdown between two of the best Japanese brewers but also two of the largest corporations. You can check out our review of The Top 5 Japanese Beers if you’d like, but we’re here to discuss these two companies and their beers in detail.

How did Kirin Ichiban and Sapporo become giants in the Japanese beer market? What do their beers taste like? Which beers are better? These are all questions we’re going to cover.

There are 4 major brewers of beer in Japan, Asahi, Kirin, Suntory, and Sapporo. Kirin holds the second largest market share behind Asahi. While Sapporo has the smallest market of the 4 brewers, they still sell more than 10% of all beer in Japan.

Kirin Ichiban dates all the way back to 1885, and in 1888 they began brewing beer. However, back then they were known as The Japan Brewing Company. It was in 1907 that they changed their name to Kirin Brewery.

By 1972 Kirin was dominating the Japanese beer world with a 60% market share. Kirin Ichiban, though, wasn’t launched until 1990. Kirin had begun using a first press method when it came to brewing. This means they used only the first press of liquid for their wort, and they are the only company in the world to do so.

In Japanese Ichiban means the ‘number 1’, So they began marketing themselves and their beer as Kirin Ichiban because they used the first press.

Sapporo is Japan’s oldest brewer of beer. A man by the name of Seibei Nakagawa created the first brewery and beer brand in 1876. He was also Japan’s first ever German-trained brew master. At the age of 17, he left Japan during a time it was forbidden to do so. He eventually ended up in Germany and learned the art of brewing. Years later, he returned home and created Sapporo.

Japan isn’t the only place where Sapporo is popular. It’s also the best selling Asian beer in the US. Sapporo U.S.A., Inc, was founded in 1984, so their beer is actually brewed in the US and Canada.

The standard beer of Kirin, is the 2nd most popular beer on the Japanese market right behind Asahi Super Dry. Kirin Ichiban is a pale lager made with 100% malted barley, water, and hops. So, it’s not too dissimilar from the beers you’ll see in America or Europe. The main difference is their use of the first press method.

To give you an idea, most light beers in the US use barley, water, hops, and either rice or corn. Heineken, just like Kirin Ichiban, uses 100% malted barley.

Kirin Ichiban, along with most Japanese beers, is quite similar to other pale lagers found. It comes in at 5% ABV and 19 IBU’s. IBU stands for International Bitterness Units, and it’s a measurement, on a scale up to 120, of how ‘hoppy’ a beer is. Hops provide bitterness to beer, the more and stronger hops used, the more bitter and higher the IBU will be.

Okay, so Kirin Ichiban is similar to some American pale lagers, but what exactly does it taste like? Kirin Ichiban offers a dry and crisp mouthfeel. The hops provide some light floral notes, but malt is the defining characteristic.

Sapporo Premium is the original Sapporo beer. They also offer a couple lighter options as well with their Premium Light and Pure selections. I imagine with Sapporo brewing beer in the US, they’re heavily influenced by beer trends in America. So, it only makes sense that they offer a low calorie and low carb selection.

Sapporo Premium slightly differs from Kirin Ichiban. In addition to using malted barley, water, and hops, Sapporo Premium is also made with rice. Many domestic lagers use corn such as Miller and Coors, but America’s two best selling beers – Budweiser and Bud Light- both use rice.

Sapporo Premium is slightly less strong than Kirin Ichiban as it comes in at 4.9% ABV and 18 IBU. While this is minimal, there is almost an extra softness to the mouthfeel than Kirin. Furthermore, Sapporo is also more carbonated than Kirin. Personally, I find it interesting how sharp yet soft Sapporo really is.

Kirin Ichiban vs Sapporo: Which Is Better?

So, which beer is better, Kirin Ichiban or Sapporo Premium? Well, the better question is, which do I prefer? Honestly, that depends upon what I’m looking for. I enjoyed them almost equally but in different ways.

On taste alone, I give the edge to Kirin Ichiban. I found the flavors to be more full-bodied than that of Sapporo. However, Sapporo was more refreshing to me. I prefer the flavor of Coors Banquet to Busch, but I find Busch more refreshing. It’s a similar situation I find myself in when comparing these two Japanese beers.

If it’s a hot summer day, I’d go for Sapporo. If I’m in the comfort of air conditioning, Kirin Ichiban may be my go to. However, another way to look at it is through food pairings.

Kirin Ichiban and Sapporo are widely offered in Japanese restaurants across the US. You’re going to be okay with whatever foods you pair with either of these. However, that doesn’t mean there aren’t better pairings for each.

I’d pair Kirin Ichiban with some stronger fish plates such as salmon, tuna, or cod. It’s also perfect for any of your favorite fried Japanese dishes. The body of Kirin Ichiban can cleanse your palate for some of those stronger meals.

Sapporo, due to it’s light, refreshing nature, would be my choice for sushi. The softness allows sushi to shine through each sip without being overpowered. over at Plate Cup Table, they recommend drinking Sapporo with ramen.

While these beers are pale lagers, they do offer some differences from the domestic beer we are used to. Kirin Ichiban is the only brewer in the world to use only the first press of the wort for their beer. Sapporo, on the other hand, is more carbonated than pretty much all the domestic lagers you drink.

There are similarities as well. Pale lagers are a little lighter in color and fullness and are meant to be served cold so as to be refreshing. Personally, I like the taste of Kirin more but find Sapporo to be the better thirst quenching option.

Kirin Ichiban and Sapporo are both sold in liquor and grocery stores as well as at Japanese and Asian restaurants. If you’re interested in trying them, go pick up a case and let me know what you think!

Below are frequently asked questions regarding Kirin Ichiban and Sapporo. Many of these are answered in the article above.

Where Can I buy Kirin Ichiban or Sapporo?

Kirin Ichiban and Sapporo are both widely available at liquor and beer stores across the country. If you’re local shop doesn’t have it, try a larger alcohol retail shop. These beers are also available at local Japanese and Asian restaurants.

Is Sapporo Better than Asahi?

Asahi is the best selling beer in Japan, but most Americans agree that it’s not the best tasting. Personally and from my research, Americans tend to prefer Sapporo and Kirin Ichiban to Asahi.

What Type of Beer is Kirin Ichiban?

Kirin Ichiban is a pale lager. So, too, is Sapporo. Pale lagers are the most heavily produced beers in the world with the likes of Budweiser, Miller-Coors, and others.

1 thought on “Kirin Ichiban vs Sapporo”