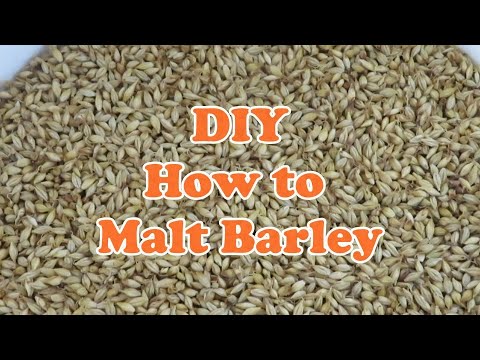 You’re already making your own beer, and that’s great, but why stop there? Why not learn to malt your own barley? Well, I can think of a few reasons. It’s not any cheaper, it’s time consuming, and it probably won’t be better than what you can buy – your first time anyways. However, that’s no different than when you first began to brew your own beer.

The reasons many of us brew our own beer is to learn, experiment, and create something of our own. And yes, it’s fun, too. So, if you’ve got the whole homebrewing thing down, it may be time to try something new. Below, we’re going to cover exactly how you can malt your own barley at home.

What You Need to Malt Your Own Barley

If you’ve ever built something, especially for the first time, you know that not having the right equipment can be quite frustrating. So, we’re going to list out what you’ll need.

There’s other equipment out there that you can use, but this is the basic item list that you’ll need. Now lets move on to actually malting the barley.

Step number one is to rinse your barley. While your barley was likely cleaned at some point, it’s likely not clean enough. There are two separate ways to do this.

The second way to do it is to pour your barley in a bucket filled with water. Mix around and flip the barley so that the dirt comes off. Once the water gets pretty dirty, strain the water out and repeat until the water is clear. Now that we’ve cleaner our barley, it’s time to steep it.

After a couple rotations of this, you should notice little white rootlets, or chits, branching out from the barley. It’s usually after the second soaking that this happens, and it means we are ready to move on to our next step: germination.

Our next step is to allow the barley to germinate. Lay out your grain in baking pans, or large just any large surface area. Our grains should be stacked a couple an inch or two high. The, make sure your pans are placed in a cool area, ideally 50-60 degrees.

Every 4-8 hours, turn the grains with your hand and spritz them to keep the barley cool. There are two ways to know when your grain is ready. First, by the acrospire which is the small, white on the inside of the grain. Each day you can cut open one or two grains. Once the acrospire is the same length as the kernel, it’s ready. The other way, is to monitor the growth of the rootlet. Once the sprouts are 2-3 cm long, it should be ready. This process usually takes 3-5 days.

So far, we’ve been adding water to help the grain germinate. But now, we want to stop that process at the right time. The way to do this is to kiln the barley, or to heat it. First, we want to remove as much water as possible. A dehydrator works best. The temperature should be around 90-120 degrees, and the grain should sit for roughly 24 hours. After 24 hours, we want the chits (white rootlets) to fall off easily.

Once it’s nice and dry, place the grains in your strainer and shake it around until most all of the chits have fallen off and out of your strainer. So far, our goal has been to dry the grain, and now, it’s to heat it.

Place your grain in the oven at 180 degrees for 3-5 hours for a basic malt. There are many different temperatures and times you can heat your grains at. If you’re interested in reading more about those, head HERE.

How to Malt Your Own Barley Summary

This is meant to be a basic guide to begin malting your own barley. There are ways to monitor the moisture levels of the grain throughout the process, and many different techniques or equipment used. Our goal is to get you started, and you can learn the more in-depth processes as you go.

Ultimately, malting your own barley is going to be a long process that takes many different attempts to figure out what works best for you. However, most people already have the basic equipment to malt barley at home. Outside of that, it just takes a little bit of time. So, next time you are looking to brew your own beer, why not try malting your own barley first?

If you are still trying to learn to homebrew, check out our guide on how to brew your own beer at home HERE.