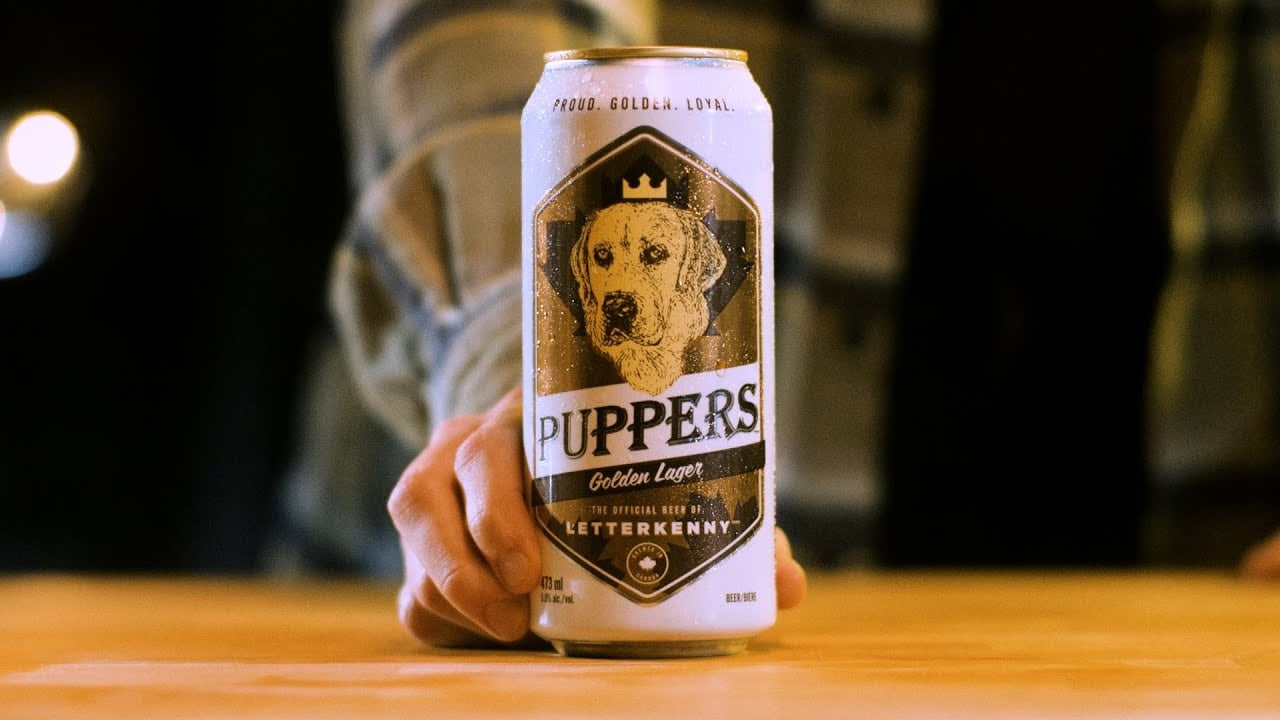 In pretty much every episode, one of the characters – or all of them – is drinking a Puppers. So, we’re here to answer all the questions you may have about it. Is it real? Who makes Puppers Beer? Where can I buy it? Pitter Patter, let’s get at ‘er.

As I mentioned earlier, Puppers Beer is real. What you may not have know is that the TV show actually predates the beer. Letterkenny first aired in February of 2016, and it followed the various groups of a small Canadian town dubbed Letterkenny, Ontario.

It centers around the group of hicks – Wayne, his sister Katy, and their friends Daryl and Dan – and follows their interactions with the hockey players, skids (drug addicts, and religious fanatics. The show has a funny way of engaging with real life issues, but it almost always focuses around drinking beer and fighting.

After Letterkenny’s immediate success, a brewery located in Sudbury, Ontario – right where Letterkenny is filmed – took on the responsibility of actually brewing Puppers Beer. Before we get any further, let’s take a look at the specifics of this sitcom inspired beer.

What Is Puppers Beer?

Puppers Beer is a 5% American-style golden lager. Previously, though, Puppers came in at 4% ABV. This change has to do with Labatt Brewing taking over control of Puppers Beer. Originally, it was Stack Brewing that created Puppers back in 2017. However, in 2021 Labatt took over the responsibilities of brewing Puppers and upped its ABV to 5%.

Where Can I Buy Puppers Golden Lager?

Here is the bad news. If you live in the United States, you cannot purchase Puppers unless you cross the border to the north. It is not sold in the states, nor is it available to be shipped across the border.

To the Canadians reading this, you’re not much better off either unless you live in Ontario. Puppers Beer is only sold in LCBO (Liquor Control Board of Ontario) stores, The Beer Store, and Sobeys locations. To stay up to date on information, you can follow their Twitter page.

Per the Canadian Government, you are allowed to bring 287 ounces of beer across the border, so if you find your way into Ontario for a vacation, make sure to bring a case back with you.

The closest I’ve ever been to Canada is Detroit, so unfortunately I’ve never been able to get my hands on a Puppers. With that said, here is what their official website has to say about it:

“This deep golden coloured lager features a grainy and bready-like aroma with slightly spicy hop notes. The grainy malty sweetness is perfectly balanced with drying hop bitterness. The body is low-medium and the beer has a slightly dry, sulphur toned finish.”

We’ve also added in a review of the Alconauts trying Puppers Golden Lager. As a note, they refer to Stack Brewing as the brewer of this beer, but it’s actually Labatt. Stack Brewing brewed a 4% Puppers Premium Lager, and Labatt currently brews it at 5% and markets it as a golden lager.

Stack Brewing was the original creator of Puppers Premium Lager back in 2017. They’re a smaller brewery located in Sudbury, Ontario – the location for filming Letterkenny. This is likely the main reason that Stack Brewing was able to legally brew and sell beer labeled as Puppers.

As of July 2021, Puppers Beer is brewed by the Labatt Brewing Company. Due to their size, you’d think or at least be hopeful that Puppers would be available in the US. Unfortunately, this is not yet the case.

Labatt Brewing Company was purchased by Interbrew and then merged with AmBev. Currently, they are part of Anheuser-Busch InBev and Canada’s largest brewer of beer. Perhaps in the near future Labatt will offer Puppers Beer in the US.

While people mainly have good things to say about Puppers, it’s safe to say this beer wouldn’t exist nor be as big as it is without the success of Canadian sitcom Letterkenny. If you can get your hands on Puppers Beer, you 100% should. It’s similar to most American lagers you already enjoy, and it has a short but unique history.

As far as Letterkenny goes, I recommend giving it a watch. It’s available on Hulu (US), and it’s hilarious if you don’t mind some dumb humor.

If you’re interested in trying international beers every month, sign up for monthly shipments at Beer Month Club!

Below are frequently asked questions about Puppers. Many of these are answered in the article above.

Where Can I Buy Puppers Beer?

Unfortunately, Puppers is not available to be purchased in the US. It’s only available in the province of Ontario and in certain stores. You can find a can in LCBO shops, Beer Stores, and Sobeys.

How Can I Get Puppers in the US?

Puppers was originally brewed by Stack Brewing. As of July 2021, Puppers is brewed and distributed by Labatt Brewing Company, the largest brewer of beer in Canada, and a part of Anheuser-Busch InBev.

Is Puppers Beer Worth Trying?

It’s very similar to the American lagers you likely already drink such as Coors Banquet. It’s not likely to knock your socks off or disgust you. However, if you enjoy the show then you should definitely try to get your hands on a can of Puppers.